NEC's MultiSync LCD4215 is a commercial grade LCD designed to offer robust performance for businesses. We take a closer look in this review to see if it lives up to its claims. 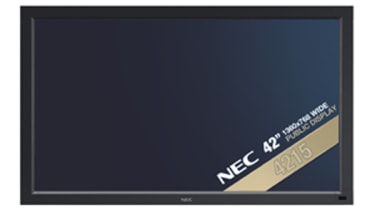 As for the screen itself, we have to begin with the fact that it's certainly not going to win any beauty contests. It's as profoundly uninteresting a black, plasticky rectangle as you're ever likely to see and extremely chunky with it too.

At least there's good reason for the bulk, though. For rather thoughtfully and very unusually for this level of the market, NEC has built into the screen overheating protection, including two cooling fans that automatically kick in if the built-in temperature sensor thinks the screen is starting to get a bit hot under the collar.

It's also worth stating here that again unusually for such an affordable display, the LCD4215 uses a public display-grade panel (rather than a TV' panel) that's protective glass- and touch-panel ready.

You can use the screen in landscape or portrait orientations, too, and multiple LCD4215s can be joined via TileMatrix to form 4x4 video walls. All of which adds to the sense that NEC has, sensibly enough, put function ahead of form with the LCD4215. 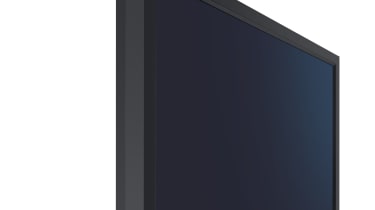 Heading into the LCD4215's style-free but functional onscreen menus, we were pleasantly surprised by the amount of tweaks on offer. Highlights include gamma selection, noise reduction, a film mode, selectable progressive and interlaced playback, picture in picture support and the option to turn overscanning on or off - all pointing to a digital signage screen that pays more than lip-service to the idea that it might be asked to play video as well as PC graphic sources as part of its duties.

This potential duality is to some extent reflected, too, in its connections, which include component video BNCs, PC RGB BNCs, a mini D-Sub 15-pin input, a DVI input able to take PC or HD video footage, plus both composite and S-Video input options.

There are no less than three audio inputs too, but please note that as with most Digital Signage products, the LCD4215 doesn't ship with speakers included as standard. SP-4020-4620 speakers are available as an option, and attach via simple spring clip connectors on the display's rear.