The evolution of the BlackBerry

In 10 years, the BlackBerry has gone from a PDA to the classic business smartphone and even a consumer device. 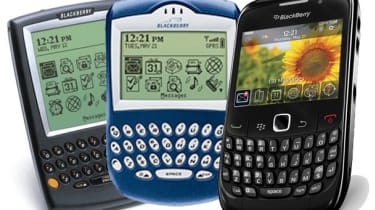 Since its debut in January 1999, the BlackBerry series of devices has come an awfully long way.

BlackBerry started off its life as a handful of relatively advanced pagers before becoming the smartphone giant that we now know so well, but it's not just the devices themselves that have changed over the years. The audience has changed significantly, too.

Although still primarily considered a business communications device by large chunks of the media and the general population - the image of the businessman/woman turned into a twitching, ragged obsessive thanks to their CrackBerry addiction isn't one that's disappeared nowadays it's not uncommon to see a BlackBerry in the palm of a teenager.

The media's frequent stance may have led to you to believe that they're only contacting drug dealers or members of some shady street gang to do over a nearby old lady's house, but the convergence of smartphone trends and unavoidably youth-orientated social networks shouldn't be dismissed so easily. The two are becoming progressively more interlinked.

You might shrug this off and say that more businesses are taking on the iPhone as their company phone of choice, but BlackBerry's strong sales, with 3.8 million accounts started up in that quarter, suggest doing so hides the full story.

It's all in the phone

This is pretty impressive when you consider that although the smartphone market has been expanding, the competition has expanded exponentially too, with Google's Android and now webOS devices out for their slice of the pie.

However, Android devices, seen by many as the most likely competitor to the iPhone's smartphone crown, have had to be made from the ground up within the smartphone boom not to mention the explosion of touchscreen devices. Meanwhile, at heart, BlackBerry devices have always mined the same formula.

RIM's vice president of product management Carlo Chiarello summed this up neatly by explaining that whatever form factor changes occurred within the BlackBerry line-up, each device would remain ostensibly a "communication device".

Such a simple, grounded outlook is refreshing, having lived through the megapixel wars of the past few years - the fierce and expensive fight to create the best camera phone - made largely futile in the purest sense by the fact that all the top contenders are without an optical zoom.

Back to square one

If you look back to one of the first BlackBerry devices that fully incorporated phone functionality, the 6210, you can see that far more than just a kernel of the design of current BlackBerry devices is in evidence, despite being released the best part of a decade ago.

Part of this is down to the iconic BlackBerry blueprint that has always been a mainstay, the always-accessible QWERTY keyboard matched with a landscape-orientation screen.

This reverses the trend mined over the last decade by almost every other key mobile manufacturer: a portrait screen matched with a numerical keypad and possibly a slide-out QWERTY.

To take it back further, the current generation of touchscreen smartphones has negated the need for a PDA for many - much to the chagrin of Palm no doubt. Devices like BlackBerrys have swept up the demand for functionality that used to be handled by Psion organisers - or at least what's left that has not been subsequently gobbled-up by ultra-slim laptops and, more recently, netbooks.

Plus, there's one core feature that has helped RIM keep a hold on its market share more than any other BlackBerry's dedicated email service.

This service, which lets users get unlimited access to their emails including Microsoft Exchange, has let RIM use an iterative design methodology in its key or flagship' devices.

Yes, they keep up-to-date with the latest relevant features such as Wi-Fi and GPS, and RIM has even succumbed to the baying call for apps with the App World app store, but gimmicks remain joyfully sparse.

Granted, the BlackBerry line does have its flip and touchscreen entries, with the 8220 and Storm devices, but these amount to offshoots from a central line that RIM would be foolish not to include, even if they do simply graft the BlackBerry experience onto another, perhaps less optimised, form factor.

It's the Curve series that has proved to be BlackBerry's most popular line of late, supplying T-Mobile US' and Orange UK's top-selling devices in Q2 and Q1 FY10, respectively.

And yes, the Curve line boasts a design you couldn't help but recognise as being Blackberry through and through.

It's perhaps this tight or some might say narrow focus that has enabled RIM to extend the BlackBerry range right down to just a couple of rungs above the lowest range of mobile buyer. Earlier this year, RIM announced a partnership with T-Mobile that resulted in a pre-pay BlackBerry 8110 bundle that would offer 12 months unlimited email and mobile internet for just 179.99.

Since then, the price has dropped even further, with this bundle now selling for just 146.80 from T-Mobile direct or 119.99 from Play.com. Compare this to the price of other pre-pay devices and you can't help but conclude it's something of a bargain.

Perhaps predictably, it comes packed with a number of social networking applications too, including Facebook, Twitter and MySpace. So, for the same price as a distinctly low- to mid-range pre-pay phone from elsewhere, you're getting connected smartphone-like functionality gratis.

The 8110 doesn't have Wi-Fi or even 3G, but it's mightily impressive nevertheless. Even the mobile internet-oriented 3 network doesn't have a pre-pay offering to compete with this, despite having a great range of highly internet-capable bargain-priced INQ devices on its virtual shelves.

Such a trumping of competent alternatives suggests that RIM might be subsidising its courting of the fledgling smartphone crowd - undoubtedly partly populated by the younger generation, even if many of them seem to have better phones than we do half the time using funds supplied by higher-spending Bold, Storm and Curve users.

Being able to do this demonstrates that RIM has created its own not-so-little mobile internet empire, not constrained by as many outside factors as carriers' solutions, such as the overwhelming load placed on O2's mobile internet service by iPhones streaming all sorts of music and supposedly funny video clips across the country.

This budget-busting BlackBerry move is a savvy one. While low-cost Android devices still command a premium of around 25 a month, and are beset by numerous functionality issues, the HTC Tattoo's resistive - and therefore relatively finger un-friendly - touchscreen being a prime example, low-end prices are only going to descend further.

Take a look at 3's 15 a month unlimited internet and text plans if you need any more convincing.

One of the key issues BlackBerry faces over the next year or so is that the unique rails it runs on are going to be ever more frequently encroached upon as mobile internet prices start getting dragged down further by the sheer number of new phones that require demand, even a decent data allowance to reach anywhere near their potential.

The first waves of low-cost Android devices like the T-Mobile Pulse and HTC Tattoo are just the beginning.

However, while rival manufacturers HTC, Nokia, even Motorola, and so on are ever-more pumping out full touchscreen devices, few have tried to jump on the BlackBerry design bandwagon with a heavily-supported device.

We can only hope that RIM won't change tack, too. The last thing we need is another manufacturer hunting after the next iPhone'. Although RIM's Chiarello says the company is always aiming towards a "broader market base", something tells us this probably won't happen any time soon.