Follow-up to the Nokia Booklet 3G is already rumoured despite the first one only now starting to go on sale. 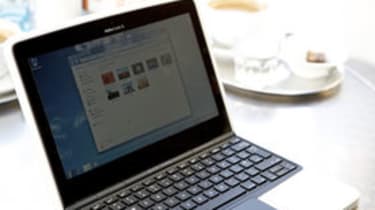 Nokia is preparing a successor to its Booklet 3G portable machine, even though it is yet to go on sale in the UK, according to reports.

Taiwan-based Digitimes cited Chinese language paper Economic Daily News as reporting that due to strong market demand for the Booklet 3G worldwide, Nokia is already preparing a follow up, scheduled to arrive in 2010.

The Booklet 3G is a netbook-sized laptop that was first announced in August. It features an array of integrated wireless technology such as 3G, Wi-Fi, Bluetooth and GPS and also claims a 12 hour battery life. It's powered by an Atom processor, has a 10in display and weighs only 1.25Kg. However, unlike budget-focused netbooks, the Booklet 3G is retailing for around 500.

Details of the sequel are inevitably under wraps, but Intel is expected to have its next generation Atom chip, codenamed Pine Trail, ready for early next year. This will feature an integrated memory controller and graphics processor on one chip, reducing the number of chips needed, which should help boost battery life in small machines.

IT PRO contacted Nokia regarding this story, but a company spokesperson said that its policy was not to comment on rumour or speculation.

Click here to read our first look preview of the Booklet 3G.