The Nokia E55 claims to make messaging as "efficient and pocketable as possible." But does it live up to expectations? We test out the theory in this review. 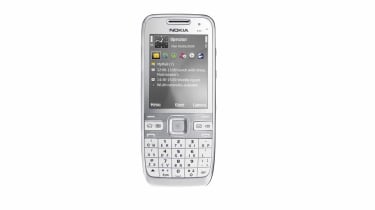 The first thing that strikes you about the E55 is that it looks like it's been stretched. Ever so slightly stretched, but stretched nonetheless. That's because this relatively small handset manages to pack in a fairly good-sized screen, hard navigation keys and keyboard.

While the screen isn't the largest you'll see, at 2.4in it's quite ample. There's a D-pad centre stage underneath the display, watched over bodyguard-like by two main shortcut keys. These two keys share two functions apiece: there's the calendar and home screen to the left and then messaging and clear to the right. The keys are rectangular so cope with dual functionality well by responding to a left or right tilt depending on what you want to do. Although the proximity of the other keys makes it quite easy to accidentally hit the wrong button.

Underneath the shortcuts, you'll find the call and end call buttons, nestling in a packed commuter train-esque way above the keypad. Given the size of the screen, it's clear to see where Nokia has made the sacrifice to save space. Numbers and letters share keys in quite a crammed fashion. While the keys themselves are responsive and feel nice to the touch, getting up any sort of speed is quite difficult because you have to press twice to get the second letter on the pad and then wait a bit if you want that letter again otherwise the keypad gets a bit confused.

Predictive text is on offer to try and combat this, but non T9 fans may prefer to persevere on their own.

The E55 will make for a comfortable fit in most hands, boasting impressive vital statistics of 49.5mmx10.9mmx116.3mm (WDH) and weighing in at just 95g, although the back black metal casing does take a little getting used too. We were a bit worried about scratching it trying to take the back off to insert the battery, but soon got the knack. And any marks we created in our kafuffle soon disappeared.

You'll need to take the casing off it you want to make use of the bundled 2GB microSD card slot too, although thankfully you don't have to remove the battery too.

The display offers just 240x320 pixels resolution, but images and icons are still fairly crisp and vivid nonetheless, although some critics may disagree. The operating system in use here is S60 3rd Edition, which isn't going to set the world on fire, but complemented by a 600MHz ARM 11 processor, is a nice little, and speedy, combination.

And they're not the only surprises the E55 serves up. It's quite a little workhorse of a phone.