The future of Wi-Fi without networks

The Wi-Fi Alliance unveils its vision for the future - here's how it could reduce business hardware and network costs. 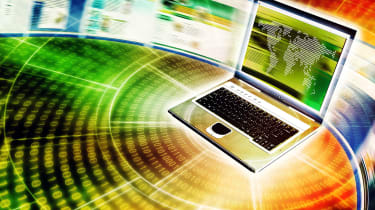 Wi-Fi devices, from laptops to phones and projectors, will soon be able to connect to one another without networks.

The technology known as Wi-Fi Direct is a set of software protocols that allow files and information on mobile devices to be sent, shared, printed and displayed without requiring access to a WLAN or Bluetooth.

The Wi-Fi Alliance is responsible for developing Wi-Fi standards and includes members such as Microsoft, Apple and Sony.

Recently, it revealed that work on a new Wi-Fi Direct specification was nearing completion.

Potential uses for the new technology are likely to include cableless connections between Wi-Fi laptops and projectors during business presentations, print outs of documents held on mobile devices and video streaming from PCs direct to TVs - all without the need to send information via a network router.

You may be wondering if Wi-Fi Direct is really a new concept after all, surely we're able to connect Wi-Fi devices in ad hoc mode right now to create client-to-client connections?

While ad hoc connections can currently be created, there's the hassle of manual configuration together with potential security weaknesses.

In contrast, Wi-Fi Direct offers WPA2 security, a form of encryption based on the IEEE 802.11i standard providing what the Wi-Fi Alliance describe as "government grade security" that makes use of a AES encryption algorithm.

Other limitations of ad hoc connections include performance issues, as the number of devices connected is increased. Wi-Fi Direct is likely to offer higher data rates along with power management protocols and Quality of Service managers that enable Wi-Fi access points to prioritise traffic and optimise the way in which resources are allocated among different applications.

How does Wi-Fi Direct work?

Once empowered with the necessary software protocols, a Wi-Fi Direct device can connect with all sorts of legacy wireless devices - including Wi-Fi certified 802.11 a/g/n gear - currently used in a wide range of devices from notebooks, printers and digital cameras to mobile phones.

Essentially this means only one of the Wi-Fi products needs to contain Wi-Fi Direct software in order for a two-way connection to operate. These connections are detected and setup automatically and can be one to many.

Wi-Fi Direct networks will also be able to cross connect to an infrastructure network to connect with the internet. Besides manufacturers producing devices from phones to laptops with Wi-Fi Direct already built into them, it may also be possible for some businesses to upgrade older wireless devices through a Wi-Fi software download providing the necessary protocols.

Wi-Fi Direct performance will depend on the device, with N' certified devices enjoying data rates of up to 250 MB per second while A' and G' devices' data rates are predicted to be around 54 MB per second with a range of about 100 metres.

With Wi-Fi Direct devices capable of acting like access points or hotspots, businesses may save money by needing a lower number of routers.

As such, Wi-Fi Alliance executive director Edgar Figueroa said: "Wi-Fi Direct represents a leap forward for our industry. Wi-Fi users worldwide will benefit from a single-technology solution to transfer content and share applications quickly and easily among devices, even when a Wi-Fi access point isn't available."

Already people are wondering whether Wi-Fi Direct will threaten Bluetooth, the open wireless protocol for sending data over short distances that powers mobile phone earpieces and uses PC adaptors to allow devices from mobile phones to a wireless mouse to interact.

Certainly much will depend on power consumption, range and performance in the head-to-head battle between Wi-Fi Direct and Bluetooth.

Certainly Bluetooth has had more time to work on high speed and low energy technologies and Wi-Fi Direct may take time to catch up although this may not take too long with companies like Marvell rapidly adopting and implementing Wi-Fi Direct.

When will Wi-Fi Direct arrive?

Despite enthusiastically announcing the "near completion" of the new Wi-Fi Direct specification, the Wi-Fi Alliance has not revealed a precise date for its publication.

It's been suggested that devices are likely to begin being certified under the new standards by next summer, and the associated FAQ adds "we expect Wi-Fi Alliance member companies to begin designing and testing Wi-Fi Direct products in early 2010". This suggests the new specification could be unveiled as early as December this year.

Certainly it seems that businesses can expect Wi-Fi Direct devices to enter the market by mid-2010 particularly with Marvell and also Ozmo, another producer of low-power Wi-Fi personal area networks both already announcing support for the new Wi-fi Direct technology.

Marvell are already making evaluation kits for Wi-Fi Direct available for business customers and plans to offer the technology as a software upgrade on existing and future Wi-Fi products.

Certainly, the technology may have profound effects for businesses, not just in terms of reducing the costs of sharing and transferring data but by offering more efficient ways to automate the backup of important data without ever having to physically connect external hard drives or servers to PCs, laptops or mobile devices.

Synchronising data between devices may also become faster and easier with Wi-Fi Direct and longer-term, new apps may eventually appear which identify work colleagues in the area and establish connections with their mobile devices to exchange business data.