We review the Livescribe Pulse Smartpen to see if it's a help or hinderance to the modern-day note taker. 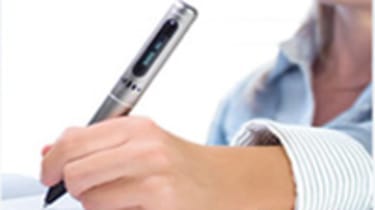 The microphone includes presets for more popular venues such as conference rooms and lecture halls, which genuinely improve the quality when used correctly.

The main features of this pen work perfectly and offer what the company boasts. The clever little gadget doesn't stop there though, it also works as a full featured calculator, offers the more musical user a simple piano - which generates sound based upon a drawn set of keys - and also has the capability to translate text written in English to Swedish, Arabic, Mandarin and Spanish; with the equivalent word spoken by the pen with the correct accent and intonation.

The included software was only a demo but we have it on good authority that more extensive features will soon be available, although whether these features will come at extra cost is unconfirmed.

The software bundled with the pen is adequate, with a basic interface for managing your installed pens and notes. To use the software you have to be running Windows XP, Vista, 7 or Mac OS X 10.5.5 or later. There isn't currently any support for Linux users, though the development kit has been made available in the hope that the community will put together a package. WINE support is also sketchy at best, so we couldn't recommend this to sole-boot Linux users at the present.

Another issue worth noting is the special paper and refills that are needed to use the device. While they're not at all extortionate (a four-pack of 100 page notebooks retails for around 12, the ink refills are around 5 for four) we feel that they might put off more casual users or the more skint students. The paper can be printed freely from the company's website though, although the cost of ink is still a consideration.

For the more image conscious users there are stylish leather bound notebooks and smarter looking pads available too.

With a few minor tweaks it would be the perfect smartpen, although in its current state it still trounces the competition on most fronts and is a must-have for any conscientious student or business person. The major issue is the lack of OCR software, and this is something many aren't prepared to budge on. For the money the Pulse costs character recognition should come out of the box, so take note Livescribe!