Does Orange offer better value for money for iPhone users?

Comparison site moneysupermarket.com has weighed up the iPhone tariffs on offer by O2 and Orange and some users may be a little disappointed. 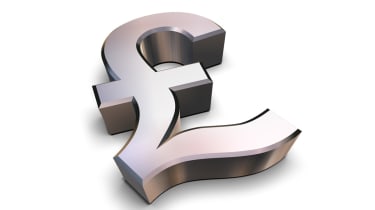 If you've been crossing your fingers hoping for a battle between iPhone operators for users' attention now that O2 no longer has an exclusive hold over the shiny device, Orange may just have disappointed you.

Many were hoping the mobile giant would announce better deals than O2, making the decision to migrate or sign up for the first time an easy one. But, with Orange confirming today that it will sell the iPhone from 10 November, the decision doesn't look to be that easy.

Users must now decide whether to go with O2 or Orange or hold on until sometime in early 2010 for Vodafone's take on iPhone pricing.

"The tariffs announced by Orange are generally the same as O2. For example, the average mobile users might go for 600 minutes and 500 texts which costs 34.26 on both networks on a 24 month contract, with the 16GB 3GS handset costing 87 on Orange and 11p more on O2," said James Parker, mobiles manager at moneysupermarket.com, in a statement.

"The only discernable differences are that Orange offers customers a lower cost entry level tariff at 29.36 a month for 150 minutes and 250 texts on a 24 month contract, and Orange impose a fair usage limit of 750MB a month whereas O2 have no set limit," he said.

"For first time iPhone customers looking to switch there is nothing between the two operators, but existing Orange or O2 customers may have some luck in negotiating an upgrade to one of the iPhone tariffs. Orange also has an attractive bonus in the Orange Wednesday offer."

He added: "The appetite for the iPhone is enormous and Orange will no doubt find it quickly becomes one of their most popular handsets, particularly ahead of Christmas. The lack of competition between Orange and O2 will disappoint many, but there is still the prospect of Vodafone offering the iPhone in the New Year which may really get the competition going." 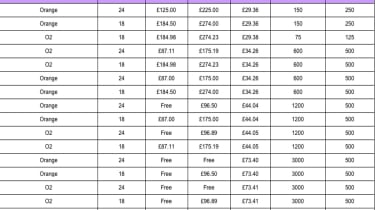 How the iPhone 3GS tariffs stack up between O2 and Orange. 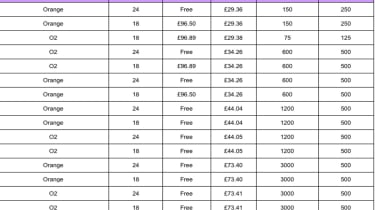 How the iPhone 3G tariffs stack up between O2 and Orange.