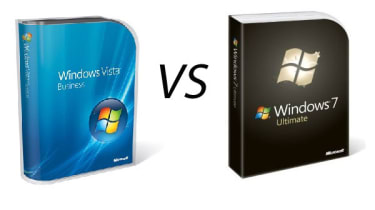 Windows Vista offered a number of features that set it apart from its predecessor. The Network Map view gave a clear indication of the layout of your network, and it had better support for encrypted networks, and newer standards such as WPA2. It also tells you if you've connected to the network but have lost internet access and it offered native support for IPV6 for the first time in Windows.

Vista also added some enhanced networking features over XP, with some clear ways of breaking down permissions in the Network and Sharing Centre.

However, as we outlined above, Windows 7 made it even easier to deal with networks. Windows 7 adds the entirely new Home Group feature that lets you easily share media though only between Windows 7 machines, which sort of implies that you're going to be filling your house with Windows 7 kit. If you do have a couple of Windows 7 machines though it does make sharing much easier.

Windows 7 also adds the ability to burn an ISO directly from the operating system and you get power features such as PowerShell IDE built-in too.

For the office, you also now get Direct Access so you can tie into the office network without having to bother with VPNs.

Windows 7 also adds Remote Media Streaming, which lets you play your Windows Media Player files over the internet, and it also offers Play To, which lets you push music to Windows 7 machines around your house, office or home office.

In Vista, memory performance was enhanced through the use of SuperFetch, we gained ReadyBoost that let you boost performance just by putting in a memory stick. It also promised enhancements with ReadyDrive, with hybrid hard disks standard drives with additional flash memory, though these never really took off and since then full SSDs have started to enter the mainstream.

One of the new features in Windows Vista was the instant search ability to launch programs directly from the Run box removing the long Windows XP programs list that when filled with too many apps quickly became unwieldy. This is much better in Windows 7 though, as it's much more granular. In Vista only the main programs can be accessed this way, but in Windows 7 you can find specific parts of the operating system, such as the control panel so most things you want to do can be done just by typing.

You can also link in third-party searches into Windows 7 to external sites using a feature known as Federated search.