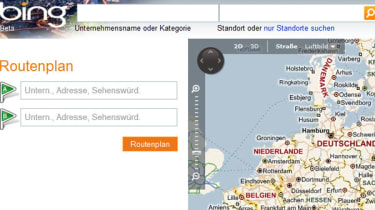 Bing Maps has gained a performance boost thanks to changes in the way its data is spread throughout the world.

Speaking to IT PRO at Microsoft's Tech Ed conference in Berlin, Chris Pendleton, Technical Evangelist for Bing Maps, said that map data has been moved from its previous single location in Virginia, US, out to Microsoft's Edge Caching Network (ECN). This consists of 12 nodes around the world, so users of the service don't have to contend for the same bandwidth.

"All the data is co-located round the world, so all users will see huge performance gains," he said.

Pendleton added that the bandwidth used by the Bing Maps page had been halved, thanks to code improvements.

Microsoft also made some changes to the Bing Maps interface. Pendelton said it was now easier to reorder saved push pins, and that different points on a plotted route could now be grabbed and moved.

This has been available in Google Maps for some time and Pendelton admitted that "this is a competitive catch-up feature". Users can now also embed Bing Maps in web pages.

Pendelton said that Microsoft had also now altered the terms and conditions for Bing, and that educational institutions and non-profit organisations could now use it free of charge.

Pendelton said that with Silverlight Control 1.0, Bing now works on a session based model, which lasts until the browser window is closed. He said that that in the event of the 125,000 sessions being exceeded, the organisation would be contacted to open discussions about licensing.

Further Bing Maps are on the way and their importance on Bing to Microsoft as a whole will increase, according to Pendelton.

"We're continuing to beat the drum on Bing Maps and would encourage users to stay tuned," he said.