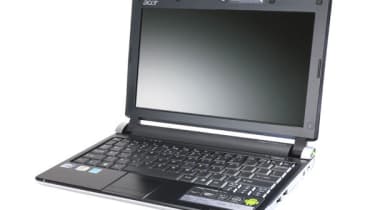 That said it's still mightily usable, and though it might be your preference, we wouldn't rush to recommend returning to XP.

While you can switch straight to Windows from Android, you can't do the same from Windows instead there's a utility that lets you choose which one to boot to automatically.

In other terms the Aspire One's highlight is the 10.1 display. With its LED backlight it presents very fine, bright, clear, and vivid images. The shell of our sample was attractive, as was the brushed metal finish around the keyboard but we're less impressed by its looks than we were 18 months ago.

We weren't fans of the keys either, which had too little travel and a slight but distracting wobble to them. The small size of the trackpad is also hard to get used to and has a slightly abrasive surface. After a day's use our finger actually felt sore. Finally, the trackpad buttons aren't the most solid. That said, as far as overall build goes, there's nothing to complain about. 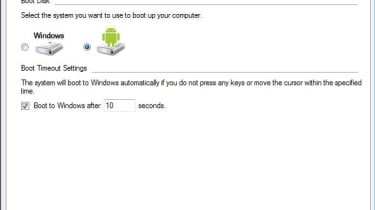 A utility in Windows enables you to choose which OS to boot to by default.

Overall, it's hard not to enjoy using the Aspire One, with the 6-cell battery that's now standard delivering 7hrs and 57 minutes in our light use test and around 5-6 hours of real world use with Wi-Fi activated.

However, there are other netbooks on the market that can deliver longer battery life and better ergonomics, and it has to be said that in its present bare form, the inclusion of Android is not a major attraction for us we'd rather just hibernate Windows and make do.

The Aspire One is certainly a good netbook but wouldn't be our first choice.

Judged on its own, the Aspire One is a decent netbook, with a great screen, and with a 6-cell battery as standard, it offers reasonable battery life. However, Android proves to be a somewhat disappointing experience, while Windows 7 feels a tad sluggish, leaving this as an interesting machine but not one we'd rush to recommend.