We got a brief hands-on with the Sony Ericsson Xperia X2, which runs Microsoft Windows 6.5. Take a look at this first look review to see what we think of the handset. 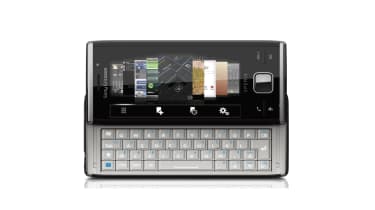 The materials used give a classy air to the handset and it's reassuringly solid enough at 155g to feel at home in most business users' hands. It's available in Elegant Black and Modern Silver hues.

The camera boasts an impressive megapixel count at 8.1. There's also auto and touch focus, image stabilisation and an LED flash. We played with the X2's snapper in quite a dark room with very bright artificial lighting, meaning some of the resulting images were a bit blurry and garish. But we're not going to hold that against the X2 as the conditions were pretty poor and we're looking forward to testing the camera out in more normal conditions for the full review.

The usual suspects are available once you've taken a picture, such as the ability to share the image (via email or MMS), bin it or gain information about the picture.

Video recording at 25fps is also on offer and a 3.5mm headphone jack is present so you can use your own headphones to listen to music and video. We didn't really get a chance to play with the audio and video features much during our hands-on, but based on the specs on paper, we've got quite high hopes.

Those who haven't been historic fans of Windows Mobile don't really have anything to fear from this handset as Sony Ericsson has done a good job of making the interface intuitive and easy to use. Nine panels (when the phone was originally announced, some 14 panels and 16 for download were mentioned) are included on the device out-of-the-box that you can change based on your mood, your location or whether you're at work or home.

The Xperia panel serves up three different home screens that boast customisation personified through the use of shortcuts and widgets. During our hands on, the demonstrator showed us how you can create a shortcut for pretty much anything on the phone, from missed calls to whatever takes your fancy.

Microsoft Office Mobile, as you'd expect with a Windows Phone, is also on offer, enabling users to make the most of any downtime by reading and editing documents on the good, as well as synchronising mail and calendar data.

There's also a TV-out connection meaning users don't have to lug their laptop around if they're headed to a presentation.

Sony Ericsson is touting the X2 as a device aimed at people who always need to be connected, which we think cover most people these days. Its claim that the handset "blurs the boundary between work and play" is quite apt and we'd have to agree, as there are lots of features on board that cater to both sets of needs very well.

Check out the video below for a quick video preview from sister site Know Your Mobile.

Our time with the Sony Ericsson Xperia X2 was short but sweet. The move from Windows Mobile 6.1 to 6.5 and other polishes means we’re looking forward to more in-depth testing to see if the handset lives up to our expectations for business users in the longer term.