It's been dubbed as an iPhone killer, but does the BlackBerry Storm 9500 live up to expectations? We review it to find out. 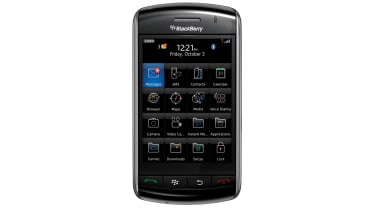 So many manufacturers have blindly set out to copy the iPhone's way of doing things in the last year that it seems innovation has gone out of the window. RIM, however, has been busily working on a real alternative rather than a second rate copy, and the result is the BlackBerry Storm 9500.

But why has everyone got so worked up about it, apart from the fact that it has a starring role in the latest James Bond flick? Well, it probably has something to do with its 3.25in, 360 x 480 display. This is no ordinary touchscreen, however; it's what RIM calls a 'clickthrough' screen - essentially the whole screen acts as a giant button, while remaining touch sensitive - an evolutionary step over the iPhone 3G and HTC Touch HD's plain old touchscreens.

It's certainly an interesting approach: in order to click on buttons and links you have to first touch the screen to highlight them, then push down to activate. We found it awkward at first, but after a while we became more accustomed to it and found it extremely intuitive. The touch-then-click approach also avoids those infuriating accidental taps that so often happen with other touchscreen phones.

In particular, typing on the onscreen QWERTY and 20-key predictive SureType keyboards - the configuration changes automatically depending on whether you're holding it in landscape or portrait orientation - feels more natural than on the iPhone and we can envisage getting up to quite a speed with a bit of practice. It still can't compete with the best hardware keyboards, notably that of the Storm's sister device, the excellent BlackBerry Bold, but it's a fine compromise.

Elsewhere, the Storm is an extremely high quality device. The brushed metal rear panel is a big improvement over the Bold's cheesy leatherette equivalent and the whole thing has the sort of fit and finish a highly paid executive would be proud to boast about at the local wine bar after work. It's a little thicker and heavier than the iPhone, but not a lot less

Strangely there's no Wi-Fi adapter, but the rest of the core hardware is as it should be, with HSDPA for high-speed mobile data, assisted GPS and Bluetooth. The 3.2 megapixel camera with LED flash isn't particularly exciting, but you do get a 3.5mm headphone socket, which pumps out decent sound quality, and video looks great on the punchy, colourful screen. There's even a Bluetooth stereo gateway thrown in for playing tunes wirelessly through your hi-fi, plus, you get a six-month subscription to Vodafone's turn-by-turn car navigation software thrown in with the 24 month, 35 per month contract.