It's a clash of the touchscreen BlackBerry titans as we see how the original Storm (9500) stacks up against the newly released Storm2 (9520). 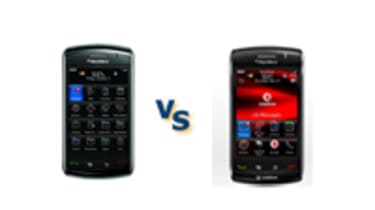 During our reviewer's time with the Storm, they managed to talk to people for half an hour, download 50MB of email attachments and leave the handset in standby mode in an area with a strong HSDPA signal until it died some 89 hours and 21 minutes later.

Push email support lies at the heart of BlackBerry and that's no exception for either Storm generation.

While the first generation Storm's use of SurePress technology, the Storm2 brings the technology to the next level, serving up a choice of virtual keyboards and brilliant auto correction functionality.

The Storm2 also boasts another boon in that it's running the most up-to-date version of the BlackBerry operating system. While the Storm's interface was pretty slick, the Storm2 boasts a UI that is fast, intuitive and pleasing to use. There's also the ability to search within apps such as email for the content that matters most to users.

The second generation Storm also boasts another well-served fine tuning element. With the Storm, users could control the volume of the handset by clicking on the loudspeaker icon on the home screen. This has evolved with the Storm2 and now includes the ability to control both the clock and the connectivity menu in the same way.

In addition to making surfing the web more immediate and convenient thanks to the introduction of Wi-Fi, the Storm2 also boasts enhanced support for CSS and Javascript.

And then there's BlackBerry App World. When the first generation Storm arrived on the scene this app store was a mere twinkle in its parents' eye. By the time to Storm2 appeared, it was bundled on the device as standard.

Of course, Storm users can still get access to the App World too, it's just more immediately available to those wielding a Storm2.