Microsoft has taken its Bing search engine out of beta. The tag-line? ‘Search has evolved’ - Bold claims. We review Bing UK to see how it fares compared to Google.

Last Friday, Microsoft officially launched the UK localised version of its Bing search engine, some six months after it was first unveiled as a beta here.

Microsoft said it would not take the search engine out of beta until it felt it could offer a level of performance for the UK that it was happy with. It would seem that time has now come.

Microsoft's history in search up to now has been spotty. The myriad of name changes over the years, such as MSN Search, Windows Live Search, Live Search and finally Bing, have reflected its confused strategy, while in the background, Google was relentlessly establishing itself ever further.

While Microsoft was just trying to come up with a name for its search offering, Google became a verb, part of the language and of the fabric of most people's everyday lives. Competing with that is a tall order and perhaps a challenge that only one as stubborn, (read rich) as Microsoft could try and take on.

But let's face facts, Microsoft isn't stupid. It knows it's not going to topple Google in search, but it has to be in that space to give itself a chance, as any percentage increase in search margin is worth a huge amount in advertising revenue. And if it helps to slow down Google in any way, then all the better.

At a briefing last week, Marie Thirlwall, one of Bing's UK product managers, was quite sensible when she told IT PRO: "It would be great if we could get to number two." At least Microsoft can feel better about itself that while it may never reach verb status, at least many are getting used to the word Bing'.

Is it any good?

So now it's out of beta, is Bing any good?

To start with we found it something of a mental effort to actually not use Google. Most people have it as their default engine in the search bar at the top right of their browser but if you want to add Bing to Firefox, you can just install this add-on. There's even one that lets you search both side by side.

Bing has gained some love for its homepage design, choosing an image that it overlays with hotspots that lead to interesting links, images and videos about the subject of the picture. You can easily scroll through the archive of images via arrows at the bottom right and we've been informed that it's popular with teachers who like to project the day's image onto classroom screens to start discussions with pupils. 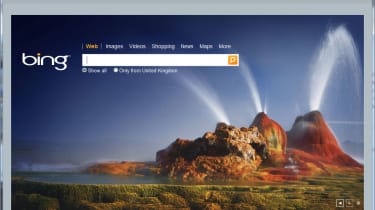 Microsoft likes to refer to Bing as a decision engine, rather than a search engine. That's why down the side of all searches you get an explorer bar where you'll find related searches or search refinements, which does make things more convenient. However, it also creates some redundancy too, as you might get a sidebar displaying Images and Video, which are repeated at the top as well.

Bing's image search impressed us on its first release and it remains a highlight. You get larger default images than Google with further details that appear when you roll over an image. As ever, the filters, such as small and large, appear down the side. Actually, there are very similar options available in Google by clicking Show options' at the top, but it's more clearly flagged in Bing. A bigger change is the infinite scroll features, which just means that instead of having to click 'next' through pages more choices appear as you scroll.

Google's video tab has always been something of a damp squib, ever since the now Google-owned YouTube became dominant, and the presentation there is a little drab. Bing innovates with videos that play automatically when you scroll over them and the lack of lag is impressive. There are filters here for length; aspect ratio, resolution and size and all are effective here.

As we reported, Bing Maps has undergone something of a makeover. Here, some of the UK flavour is apparent, with nearest tubes popping up over London locations, an effective directions tool, that can be email or printed, and a Tube map overlay.

Bing Maps defaults to the A-Z style maps, which personally we find too busy, but you can choose to use a simpler road Maps style, which is more like Google Maps. In Bing Maps, business and location searches are separated out, but which ever box we tried, when we typed in HMV, it took us to Hemavans Flygplats in Sweden, which isn't quite what we were after. On the plus side, the directions for the 1753.8 mile, 35 hour trip, came up in a flash. 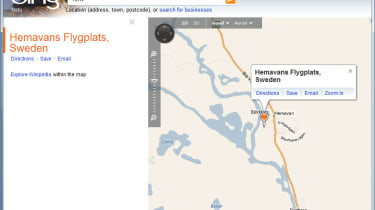 The other feature Bing Maps offers is a Bird's Eye' view, which is actually an angled, isometric' view. It certainly looks nice, but compared to Google's Street View, isn't that helpful in actually identifying where you're going unless you plan to travel by micro-light.

Shopping is an area that Microsoft has said it has worked on to optimise for the UK, and this means that it has now fully integrated the Ciao!' comparison engine into Bing itself. This does give you a starting point, but to our eyes its layout is still confusing. We appreciated seeing the Reviews' tab on the left as this is something we often want when looking for products, but it's only as good as the data available - and using the closed wall of Ciao, rather than the wider internet, is asking for trouble. 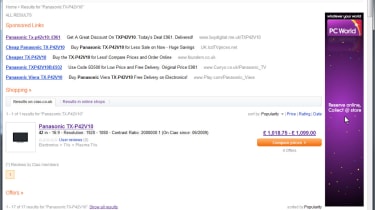 Our test search- a Panasonic TX-P42V10' plasma TV - came up with a price comparison. However, the reviews tab was populated with other Panasonic products and none of the TV itself. To add insult to injury Google's price comparison found several cheaper options.

Fortunately, much of the promised UK localisation works well. Type Premier League' into Bing and you get a run down on the next six football fixtures right at the top above the core results Google gives you the last and next game. Type a football team in and you'll get a list of its next games, and related searches down the side, such as Kit', Tickets Fixtures' and so on. Type in the name of a movie and you'll get cinema times based on your location, with slightly more detail than Google and with a movie poster too, which is nice. 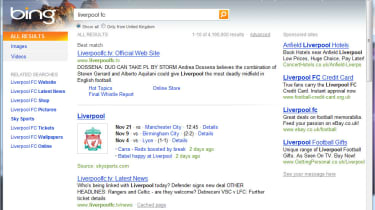 We also really liked how it dealt with businesses. Type in Debenhams and it provides the main link and Deep Links to sub-sections, just like Google, but it also pulls out the Customer Service number, which is a nice touch. And, yes, even for HMV too.

Other great features are visual search, which is designed for when you don't know exactly what you're looking for by name. For example, if you don't want a dog but don't know your breeds you can type in dog breeds and it will display a gallery of images for you to browse. It's a nice idea, but you're limited to what Bing provides and with only five options available it's one aspect that's still very much in Beta. 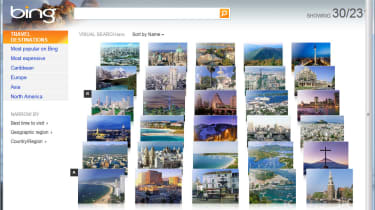 Wolfram Alpha searches are also now live in the UK. That said, it will only work on calculations that it knows to explicitly send to the Wolfram Alpha database, but at least Bing can now keep pace with Google for integrated calculations.

Taken as a whole, it seems more than reasonable to have taken Bing out of beta. Microsoft has clearly worked on usability, accuracy and speed, and in most cases it does as well as Google. Some might even find some aspects easier and more satisfying to use than Google, while there are those that are clearly not as effective.

The problem for Microsoft is that it's clearly worked very hard to produce a search engine, that is, most of the time, a match for Google, but no more. For example, while we do slightly prefer Bing's image search, and we admire the categories and filters, these are hardly major reasons to stop using Google. It's more of a case that should you ever find it as a default, there's no longer any need to cringe, and we're sure that Microsoft won't be sitting still from this point and that we can expect more improvements to keep up that pressure.

On that basis, that number two spot in search doesn't seem too unrealistic a target.

Bing has clearly been improving gradually over the past six months and it's now a very reasonable search engine, with some pleasing touches. There's no longer any need to run a mile should you need to use it, but equally it's unlikely to pull too many away from the safety of Google.