A Cray XT5 dubbed Jaguar has knocked the Roadrunner from the number one spot on the TOP500 ranking. 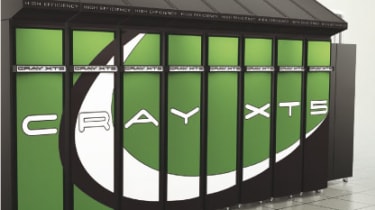 A system change has helped knock the Roadrunner from the top spot in a list of the world's top supercomputers.

After winning the number one spot on the TOP500 list in June 2008 by breaking the petaflop/s performance barrier, the Roadrunner held on for a year and half, beating the Cray XT5 by just a bit each time.

But after a repartitioning of the system knocked its performance from 1.105 petaflop/s recorded in June to 1.04 petaflop/s, dropping it to number two.

The Jaguar, a Cray system at the US Department of Energy, recorded a 1.75 petaflop/s speed after an upgrade earlier this year.

Coming in third at 832 teraflop/s was another Cray XT5, based at the University of Tennessee.

The fifth is the highest ranked Chinese system ever, a new Tianhe-1 at the National Super Computer Centre.

The UK had 45 supercomputers in the list. The top ranked was a Cray XT4 called HECToR, which lives at the University of Edinburgh.

HP held its lead over IBM for top manufacturer, pulling in 42 per cent of the total, over its rival's 37.2 per cent. Cray, SGI and Dell all had under four per cent. IBM also lead by performance, with 35.1 per cent.