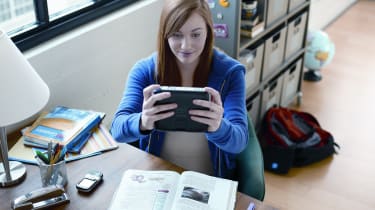 Intel has unveiled its new Reader device, which it hopes will level the playing field for visually impaired people and those with dyslexia.

The device, which looks a bit like a portable media player (PMP) and boasts a downward-facing five megapixel camera, is capable of housing 600 pages thanks to 2GB storage. It can then read text back to users at varying speeds or convert captured data into MP3 format.

Some six million people in the UK have dyslexia, with four per cent having severe dyslexia, according to figures from the British Dyslexia Association (BDA).

"[People with dyslexia] have strengths. They are great at seeing around corners, spotting gaps in the market. That's why a lot of entrepreneurs are dyslexic," said Judi Stewart, chief executive of the BDA.

"There is no cure for dyslexia, but what's needed is a good education, good coping strategies and confidence... That's why technology is a real answer. It's not the whole answer but is part of the answer of moving into the future."

Ben Foss, director of access technologies at Intel's digital health group, has first-hand experience of what dyslexia is like. During a demonstration of the Reader's capability, he detailed how he used the tool to help him convert 262 pages of a book about cancer into an MP3 recording on his iPhone so that he could learn more about the illness to help loved ones cope.

He also demonstrated the Intel Portable Capture Station in action. It's a tray-like add-on for the Reader that enables users to capture text and images more easily. The use of an Intel Atom processor also helps the device cope with multi-tasking so it can process images in the background while more are being captured.

"We have ramps on our buildings so people can get access. This is so people with difficulties with text can get access to that text," Foss said, who also admitted that there will be a slight learning curve with the Reader.

"It's like we're shipping the first microwave oven. There are certain things you need to get used to," he said. "When you look at a book, what's inside? It's the dust jacket, which the text reader saw but it's not the text you were looking for. So we tell users to remove the dust jacket."

It is also hoped that the Reader will level the playing field for the two million-plus people in the UK with visual impairment. The device can read data from up to 50cm away and size 10 font.

But, while the Reader has gained the backing of both the BDA and RNIB, the device does not come without issue. The 999 price tag being one, copyright in the UK being another.

"I think it's a fine price for an organisation but for an individual it's out of scope," said Judi Stewart, chief executive of the BDA. "I think that's a little bit of a barrier and I hope it sells well and Intel can bring the price down."

As for copyright concerns, Intel's Foss claimed: "We ask you to follow the law."

Despite these concerns, Intel said it hopes to expand the Reader to other languages and countries. Although there are no immediate plans to incorporate hand writing recognition, according to Foss.

The Intel Reader is available now from Amazon, HumanWare and Inclusive Technology.