A guide to BlackBerry Messenger 5.0

Andrew Williams guides us through the range of new features available in BlackBerry Messenger 5.0. 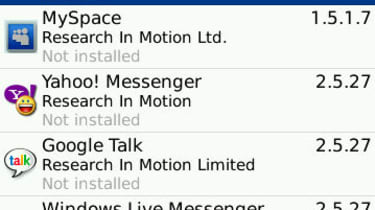 RIM's new version of the BlackBerry Messenger service, the instant messenger designed just for the legions of BlackBerry-toting folk, adds a whole host of new features to an already pretty impressive package.

BlackBerry's latest Storm2 (9520) and Bold 9700 handsets may be iterations on a couple of already pretty good blueprints, but Messenger 5.0 brings functionality that has the potential to even make iPhone-owning colleagues jealous - including avatars, large media file transfers and, our favourite, barcode identifiers.

New high-end BlackBerrys will most likely be good to go with Messenger 5.0, but even users of older devices have a good chance of being able to use the new software. All users need is a BlackBerry capable of running OS version 4.5 or above. So, that includes everything from the original Bold 9000 right down to the now bargain-priced Pearl 8100.

BlackBerry Messenger is also a very cost-effective way for users to organise their time amongst other people. The groups function allows for shared files, media and appointments, giving Messenger the potential to become a productivity hub that can keep a host of BlackBerry-equipped colleagues in sync. Plus, because it runs off the standard BlackBerry internet connection, there's no additional cost involved. BlackBerry Messenger is free to use and download too.

Before installing the latest version of BlackBerry Messenger, users need to make sure that their BlackBerry's operating system is updated to at least version 4.5. Older versions of the software are incompatible with Messenger 5.0, but devices can be updated by hooking them up to a computer and following the steps outlined on the BlackBerry website.

Thinking about buying a BlackBerry? Click here for everything you need to know about choosing the right smartphone for you to keep in touch with family, friends and work.