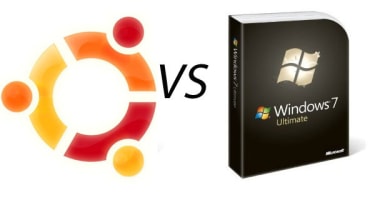 Is there a subject more sensitive for hardcore computer users than the operating system they use? It's one of those subjects that inspires extreme opinion and zealots will be guaranteed to vent their opinions forcefully, and woe betide anyone who disagrees.

It's with some trepidation then that we pitch the most recently updated flavour of Linux, Ubuntu 9.10 Karmic Koala, against the new mainstream choice that is Windows 7.

While Windows is only manufactured by one company, there are literally hundreds of flavours of Linux available out there aimed as specific user bases, but a few are dominant. Ubuntu is increasingly become the defacto choice for standard desktop users simply because a lot of work has been put into making it as easy to use as possible.

Ubuntu is based on a version of Linux called Debian, which itself consists of a Linux kernel, combined with GNU project tools, while the desktop interface is based on the Gnome project. It's all distributed in Europe by Canonical. If that all sounds complicated, then welcome to the world of open source.

Ubuntu (pronounced Oo-boon-tu) has been around since 2004, since Mark Shuttleworth gathered a group of developers to create a new flavour of Linux aimed at the desktop. Version 9.10 is not an update to the ninth version, but rather the first numeral represents the year and the second the version release for that year. Each version is also known by an alliteratively named animal so 9.10 is Karmic Koala and the previous release was called Jaunty Jackalope.

The history of Windows is surely very familiar to people, but we'll have to mention that Windows 7 has been hailed as the panacea for the PR and to a large extent sales debacle that was Windows Vista and it's been very well received by reviewers and analysts alike.