The LHC is set to get switched on, but experiments of another kind of continued for the past year, as CERN's openlab trials Intel chips. 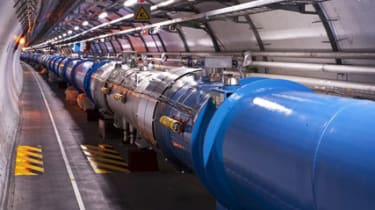 "Now, the one thing about CERN is they're different from some others... if for instance their servers are down for the day for some reason, it's not like a bank. They're mission critical, but they're not business critical. Now when they start doing the testing, it'll be business critical to a degree," he said.

"So when we create and develop CPUs, we have to make sure that those CPUs can actually be absorbed and the benefits can be seen in all communities SMB, SME, and all types of veritcals. But certainly for high performance, CERN is a great partner of ours."

Earlier this year, CERN's openlab was piloting Intel's Xeon processor 5550 series, in order to advise suppliers whether it was right for CERN.

Aside from the processing and efficiency challenges, CERN works differently than many other businesses. "Computing on physics is everything about storing the data and accessing the data, both locally and remotely," said Jarp, explaining that CERN will run 600,000 jobs a day with some lasting four to six hours on a single core. "What's important to understand with CERN... here we really hammer the sites, and the computers, and the individual cores 24 hours a day."

Openlab tried three different versions of the Nehalem-based processor, the L5520, E5540 and the X5570. Jarp said it wasn't a given which one would win, but that all three "flavours" showed "quite a big improvement."

The lab wasn't just looking at the processor, but also trialling the new Turbo mode and Simultaneous Multi-Threading, so tests were run with those features off and on.

Because of CERN's energy constraints, openlab wasn't looking just at performance, but performance per watt. So the L5520 clearly used the least power, but would need more units to get as much performance as the lab was using before.

One way to get more performance is the multi-threading. Flipping on the SMT boosted performance by as much as 20 per cent, Jarp said.

The tests showed the L5520 is 36 per cent more efficient for performance per watt than the Intel Xeon 5400 series, which could save CERN some 850,000 over three years.

So what's next for openlab and Intel? Jarp is most excited about mulitcore.

"We probably have billion of events at some point... and they can all be computed individually," he said. That means he's looking to parallelism to exploit multicore to allow as many jobs to run at once as possible. "The only snag is that right now, it's mulitprocessor, so we need memory to be made available which requires energy."

"We're very very interested in multicore, manycore evolution... We're trying to push Intel and other companies to go as quickly as possible down that path," he said, adding he'd like to see a mixture of large and smaller cores.

And CERN will need the extra processing for all the data it's going to see. "When we started planning for CERN, people said "petabyte, what's that?" Now it's common place. We're actually on way to next milestone, which is exabytes."

Read on for more about CERN's computing systems and for the full interview with openlab's Sverre Jarp.