TomTom's long awaited car-kit for the iPhone has been released. In this review, we take it for spin to see if it's worth the outlay. 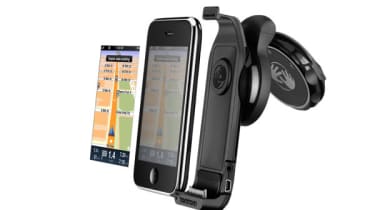 When the iPhone 3GS was released, one of the few hardware features that gave it an edge over the standard 3G was its built-in physical compass. This gave it the potential to be used for turn-by-turn navigation, a feature that iPhone users had long been waiting for. Eventually, at Apple's WWDC in June 2009, GPS leader TomTom demoed its software running on the iPhone and by mid-August you could actually buy the app itself from the App store.

Even better, TomTom said that it would be releasing a custom car kit designed for the iPhone, making what would surely be the ultimate navigation solution on the market. Oddly there was some confusion over the release of the TomTom car kit, which appeared on the Apple online store in September but was soon pulled. However, it was finally made available in October.

The TomTom app does not come bundled with the car kit though, and has to be purchased separately from the App Store. The price of 59.99 inc. VAT for the UK and Ireland maps raised eyebrows, especially as CoPilot Live is available for just 26.99. 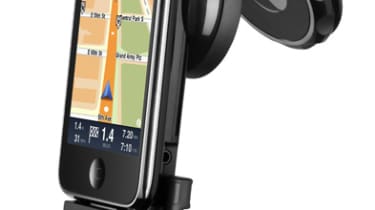 If you want maps for all of Europe it costs 79.99, while other individual regions will cost an extra 34.99 to 52.99, depending on the area, so those costs can soon really mount up. And if you want to mount-up' your iPhone using the long awaited car-kit, that will cost you an extra 99.95 inc VAT.

Therefore if you're considering the TomTom car kit and the UK maps you're looking at just under 160 which comes in over the price of a dedicated TomTom unit such as the TomTom One, which Amazon UK will send you for just 113.94. The iPhone TomTom combination then really has to justify itself to be worth the extra cost. But does it?

The official car kit offers several benefits, such as an integrated GPS module based on a SirfStar III chipset - the same chip you'll find in most standalone satnav devices. When connected, this supplants the one in the iPhone and should deliver a much stronger signal.