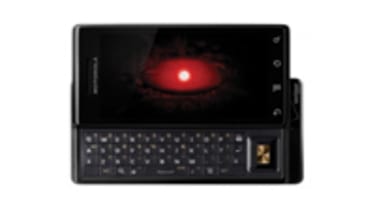 Compared to other, more soothing voice guides, at least it doesn't spend all of its time telling you that it's "recalculating" your route when it loses track of you for a brief moment. Google Maps Navigation knows when to speak and when to keep quiet.

Our only other qualm with the DROID is the fact that Motorola and Verizon omitted multi-touch support for functions such as two-finger zooming - something that is supported in the European variant of the DROID, dubbed the Motorola Milestone. UK users will no doubt be smiling that we're getting something our US counterparts don't have first, rather than the other way around.

The reasoning behind the move is supposedly patent-related, but it still would have been a nice feature to have for US mobile users.

Overall, the DROID is faster than any other Android phone (at this point) at completing tasks and most importantly, perhaps rendering the graphic elements of its UI. The result is a nearly lag-less user experience. It also produces terrific-looking YouTube videos with very few hiccups or jitters, and local video playback is as smooth as it gets.

In our opinion, the Motorola DROID is far and away the best Android-based smartphone on the market. However, with the amount of attention Android is getting from manufacturers right now that could change at any time.

Head to the next page for the pros and cons of the Motorola DROID.