Fujitsu brings the latest 8Gbps FC SAN technology within the grasp of small and medium-sized businesses (SMBs). In an exclusive review we put this Fujitsu Eternus DX80 high-speed disk array through its paces and find out if it delivers on its promises. 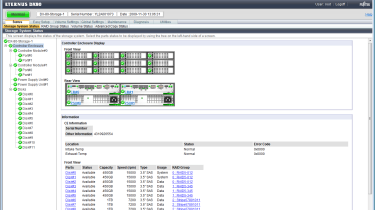 Thin provisioning isn't supported but open volumes can be concatenated with others to provide a simple volume expansion option and they support RAID migration. Fujitsu's proprietary encryption is included as standard and is applied on a per volume basis. Affinity group support can be enabled on selected FC ports where they provide good access security by allowing you to group multiple volumes together and only permit specific WWNs to access them.

SDVs are a function of Fujitsu's SnapOPC+ (one point copy) feature, which offers a facility for snapshots and offloading backup operations. The manual makes a real hash of explaining the process but you start by creating an SDV, map it to a backup server and run an Advanced Copy session for the source/SVD volume pairing.

Once the session starts it takes a single, point-in-time copy of the source volume to the SDV. We tested this by mapping a standard volume to a production server and copying around 30GB of data to it. We then mapped an SDV to a separate backup server where it appeared as a raw disk.

After firing up an Advanced Copy session, the SDV on the backup server automatically presented an identical volume to the source complete with all data. As this is a single snapshot, any data subsequently added to the source volume will not be added to the SDV so to keep it up to date you need to stop the session and manually start a new one.

The DX80 comes as standard with support for eight snapshots which can be increased to 1,024. By its nature, SnapOPC+ allows copy volumes to be much smaller than the source and it also supports up to eight generations of changes where you create sessions that copy the same source volume to different SDVs.