The Chancellor has suggested the National Programme for IT faces cuts. 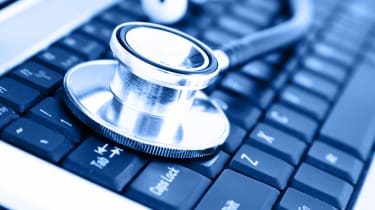 The government has said the 12.6 billion NHS IT overhaul is on the chopping block.

Describing the National Programme for IT system as "not essential to the front line," Chancellor Alistair Darling told the BBC that the upgrade may be shelved in this Wednesday's pre-budget report to cut costs.

"It is necessary for me, on Wednesday, to indicate areas where we are going to cut spending and where we are not going to spend as much as we were," he said.

"For example, the NHS has quite an expensive IT system that, frankly, is not essential for the front line. That's something we do not need to go ahead with just now," he added.

The Treasury is yet to get back to us with more detail on exactly what aspect of the programme is being cut and how that will affect existing contracts, but told others the entire project isn't on the line, and that more details would be available Wednesday.

The 12.6 programme has been troubled from the start, with two contractors dropping out of massive contracts last year.

The Conservative Party told The Guardian it wasn't surprised by the possible cuts. "After seven years, Labour have finally acknowledged what we've said for years that the procurement for the NHS was costing billions and not delivering," Andrew Lansley, the shadow health secretary, told the paper.

"This is another government IT procurement disaster," he added.

The Liberal Democrat party agreed. "This whole programme has been disastrously flawed from the start," health spokesman Norman Lamb told the Times. "It has held back the development of IT at a local level, cost billions and is running years behind schedule."

"The truth is that the national programme should be abandoned in its entirety, subject to existing contractual obligations, and instead we should start building from the bottom," he added.

Click here for more on the National Programme for IT.