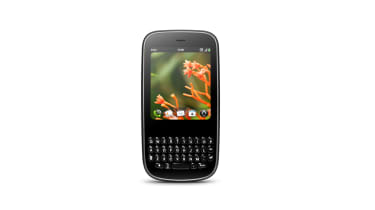 Interestingly, even though both hardware keyboards are similar, we prefer the Pixi's key configuration, which places the keys in a straight line as opposed to having each row curved upwards like the Pre. Also, Pixi's case doesn't have the Pre's raised plastic bottom edge to get in the way of the bottom row of keys.

On the other hand, the Pixi's screen is smaller than the Pre's. Although they're outwardly close in size, that little difference translates into a big deal for small smartphones. We found the Pixi's standard typeface a bit small for our eyes while browsing the web. It's a quirk you could well work around, but it's certainly worth bearing in mind if you're going to be spending hours staring at the screen.

Of course, using the webOS reverse pinch zoom-in motion allows you to easily resize everything on the screen. Yes, the Pixi follows the Pre's lead and also supports multi touch, which is music to our ears.

The price is right?

Palm Synergy also makes an appearance to help users bring key apps like Facebook and email together in one place for easy connection and use.

Of course, there's also access to the Palm App Catalog so users can obtain the extra apps they need for work or play.

While there are many business and consumer friendly features on offer, the Pixi's killer feature is likely to be its price. In the US, the Palm Pixi is a tremendous bargain at the $99.99 price point (after a rebate and with a two-year service agreement), which is the same as the HTC Snap on Sprint.

We envisage the Pixi coming in at around the same price point as the Snap when it hits the UK, so expect to be picking up the device for free on 25 a month contracts. At that price it's a real no-brainer.

Head to the next page for the pros and cons of the Palm Pixi.