In 2009, the iPhone 3GS, Palm Pre, and HTC Magic mingled with the Dell Adamo and Sony Z-series in the best hardware of the year stakes, while we also saw innovation software from Google Wave and Wolfram Alpha and even Microsoft. 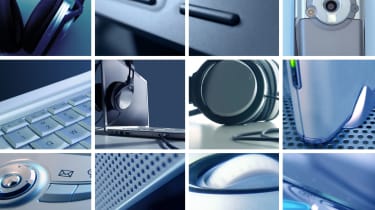 This year may not have been the best year for the economy, to say the least, but that didn't stop the tech from coming thick and fast.

There's were some very significant technology launches of both hardware and software, and IT PRO was there to give you the low down with our product reviews.

We take a look back at 2009 and take on the tricky task of picking out our favourite top 10 reviews of the year.

This year was undoubtedly the year of the smartphone, and the most eagerly anticipated handset was the Apple oh hold on it was actually the Palm Pre.

First previewed back in January at CES, it took a full six months to reach the shops and then only US ones - it took until October for it reach UK shores. What the fuss was all about was that it was the first smartphone that could genuinely take on the iPhone thanks to features such as multi-touch.

It even bested it in some areas with true multi-tasking and wireless charging. Whether it will have the legs to maintain the pressure on the iPhone remains to be seen, but this was still the smartphone launch of the year.

Before the Palm Pre, the main iPhone challenger was the HTC Magic. The Magic was the second Google Android based phone, which probably made it more significant than the first, the G1.

This was because it was better than the G1 as it was free of the chunky chassis and keyboard, but also because it marked the beginnings of a flurry of Android based phones and despite newer software and flashier features, not all are better than the Magic.

The iPhone 3GS may have pushed things back in Apple favour, but the Magic showed that you could make a very usable and pocketable Google phone, and was one of the most significant launches of the year.

Is there any group more vocal about their love than Linux fans? Ubuntu has become the people's' Linux flavour, but that doesn't mean its devotees are less passionate. The latest version of Ubuntu, 9.10, also known as Karmic Koala, is slicker, faster and easier to use than previous versions, and though it's not as smooth looking as say Windows 7, it's more than acceptable.

The sheer fact is that you can get a complete OS, pre-loaded with almost everything you need for free, makes this a very attractive alternative to adopting the Microsoft hegemony, and that makes it a highlight of the year's releases.

Sony's Z-series notebooks have always been a favourite of ours, cramming in everything you need in a small and powerful laptop the true definition of a ultra-portable.

The VGN-Z31VN/X may not have a the catchiest name, but it's got everything else a high res 1,600 x 900 LED backlit display, a great keyboard, a powerful 2.66GHz Core 2 Duo and dual graphics chips giving a choice between power or stamina.

The latter delivers over nine hours - true all day computing without charging. SSD or standard HDDs are an option, and you get Wireless N, Bluetooth and integrated HSDPA. A true marvel of a machine, and all for a mere 1,781. Well, there had to be a catch somewhere.

No one innovates quite like Google, and the hype was intense for its new collaboration tool Google Wave. It was going to change the way we communicated forever, replacing 40 year old email technology with something new, dynamic and exciting.

Developers were the first to gain access before invitations began to trickle out to those in the general public that had signed up. At this point though the general mood went from "when can I get it?" - to "what is it?"

The mix of instant messaging and email, with the ability to add images, video and widgets sounding intriguing but confused users as much as anything else. A highlight of the year undoubtedly, but at this point, the jury is still out on this one.

If there was one thing that Microsoft had to get right it was Windows 7. Vista had been a marketing disaster and with the threat from Google looming ever larger the consequences of another poorly received OS could have been dire.

Fortunately it got it right and it did by listening to its massive user base for once. Even in January the beta impressed us, and the OS was essentially done and dusted by August when IT professionals were given access to RTM code.

Features such as Libraries, Powershell 2.0 management, Direct Connect, Bit Locker to Go, and XP mode made it appealing for businesses and the clean, shiny Aero Glass interface made it attractive for everyone.

While the iPhone finally had some real competition from the likes of the HTC Magic and the Palm Pre, there's no doubt that the iPhone 3GS was still one of the smartphone highlights of the year.

In it's third iteration, the iPhone finally reached its potential that it hinted at when the first version launched two years previously.

The hardware added a physical compass, enabling improved Google Maps navigation and the potential for turn-by-turn directions, while faster clock speeds adding an appreciable turn of speed. The icing on the cake was the new features in the iPhone 3.0 OS, with push notifications, MMS, copy and paste, and landscape keyboard being the highlights.

In a nutshell, it's still the phone to beat.

With the Z800 HP proved that you don't have to be Apple to make a desktop computers cool. This was all the more impressive for the fact that it was a workstation.

Key to the Z800's success was that it was designed by BMW Designworks in the USA, who made a chassis that was both functional and attractive.

The toolless design meant you could access all the interior components without having a screwdriver. You can even take out the power supply just by pulling a handle, making replacements super easy.

When dev time equals money, things like this really count. With awesome power from its Nehalem based Xeons' and up to 192GB of RAM, if you need to design a 3D movie, or analysis geology for oil, this is the computer you need.

An exquisitely designed laptop chassis, bristling with satisfying details and oozing premium class it could only be a Dell?

Love or hate Apple, it's clear that it spurned the competition to up its game and Dell clearly has the MacBook Air in its sights when it decided to create the Adamo and we're glad that it did.

In our review, we described this lightweight, ultra-portable machine as "impossibly slim", and at 1.8Kg it won't weigh you down. But it's how it looks and feels that crucial with tiny lights embedded in the chassis and cool engravings rather than stickers used for the service number.

It's not the best value or most powerful machine, but it takes the crown as the best looking Windows-based ultra-portable on the planet.

It seems madness these days to try and take on Google these days, especially in its core search market but when Wolfram Alpha appeared it used the rather clever explanation that it wasn't a search engine'.

Then again, everything about Wolfram is clever. The brainchild of Professor Stephen Wolfram, the idea was to create a, computational search engine' based on the Mathematica modelling system. Instead of just pointing you towards information on the internet, the tool will actually perform computations on data you enter, delivering statistical analysis and comparative data in a flash.

It can be fantastic, but it's heavily dependent on it understanding on having data on whatever you input. It doesn't always understand what you enter, but it's amazing it works at all.

Its basic results have since been integrated into search engines such as Bing but on its own, many will struggle to find a use for it. Even so, it was undeniably one of the most innovative new products of the year.

Click here for our top tech news stories of the year.