The N900 is Nokia’s most hyped phone this year, running on the Linux-based Maemo OS. Does it show that Symbian should be scrapped or is it just another touch screen disappointment? We review the N900 to find out. 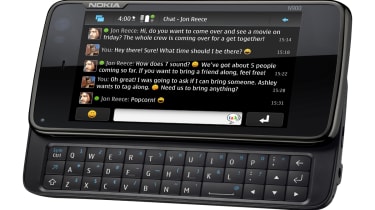 Preinstalled extras include a weather app, which is equally as detailed and easy to use as an iPhone paid-for app, the Ovi suite of extras including Maps, Mail and a shortcut to the Ovi store and Facebook that allows you to view your friend feed directly from the home screen,

The screen is probably the one disappointing aspect. This could be down to the fact that the sample we were using was a pre-production model, but it seemed the screen wanted to do what it wanted to do rather than responding correctly to our prods.

Mishaps aside, looks-wise, the screen is stunning. Nokia has always managed to put a bright, crisp and high-resolution screen on its flagship handsets, and the 800 x 480 pixels, 3.5-in screen certainly doesn't let the reputation drop.

In terms of multimedia, the camera is tip-top. It produces crisp images, and the dual LED flash goes a long way to highlight dark images. It's hidden behind a slide lens cap too, meaning you won't get any dust stuck on the lens and scratches will be prevented.

The Nokia N900 is the first of what we can see to be a hugely successful range for Nokia. It ticks all the boxes for a smartphone speedy multitasking, a whole range of applications promised, a large screen and capacious storage.

The only things we're slightly concerned about are the responsiveness of the screen, fiddly keyboard and less-than-pocketable size.

Taking into account the Nokia N900 we were using was a pre-production sample, the handset looks like it could certainly be a strong contender for the smartphone OS crown.

The screen may be a little unreliable, but if Nokia can upgrade this to a capacitive one on future Maemo handsets, we would certainly see the platform as Nokia’s saviour.