Lenovo has released its first all-in-one PC. We review the Lenovo ThinkCentre A70z to see if it's any good as a business PC. 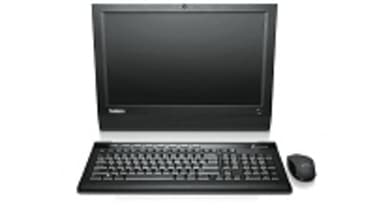 When IBM gave up on making regular computers back in 2005, some computer purists worried that the magic of the ThinkCentre and ThinkPad brands was gone and that the legendary solidity and build quality would also disappear.

They would be wrong though, as since then Lenovo has actually produced quite a number of impressive machines in both laptop and desktop form, with the X300 laptop and the ThinkCentre A58 desktop being just two examples.

With the ThinkCentre A70z Lenovo hopes to keep this up. In what is something of a departure, instead of a conventional desktop or tower chassis, the A70z is a neat, compact all-in-one machine. Think of it as an iMac, but in a suit.

In style terms the Lenovo offers that consistent IBM/Lenovo look of squared off edges and matt black plastic, which, alas, is visually not that interesting. This is clearly not a machine for the home, unless it's a home study. And a very dour one at that.

But the idea of an all-in-one machine certainly does make a lot of business sense. It frees up desk space and reduces clutter. The all-in-one also saves on power, as you're only running off a single power supply, instead of two. What's more it's also more eco friendly in terms of packaging with one box, instead of two. A laptop would make for an even more space friendly computer, but they are usually generally more expensive options and unless you need the mobility of a laptop there's a lot to be said for the improved ergonomics of a standard keyboard mouse and display.