Looking after planet earth is high on the agenda for individuals and businesses alike. We review the Vexia Econav 380 to see if ticks both the navigation and green boxes. 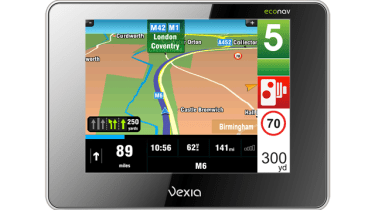 The second issue is that, if you drive reasonably efficiently anyway, you'll save little extra on your fuel - if any at all; it's no silver bullet. In back-to-back comparisons with a standard TomTom Satnav, over three different types of journey, we found following the econav to yield worse MPG results than driving normally. A slight lag seemed to afflict gear change instructions, which resulted in us over-revving in second gear.

That's not to say it won't work for you. Our natural driving style tends towards the fuel efficient anyway, but even if you happen the world's most aggressive driver, once you've learned when and where to change gear, which speed to be in, and to accelerate and brake more gently, you won't need the advice of this Satnav any more.

So much for saving the planet; how does the Econav fare when it comes to navigation? Alas, it's the same mixed bag. There are some things that really work well: the maps are clear, uncluttered and easy to view. The routes it chooses seem sensible enough. And there are some really nice touches too. The voice instructions go beyond the dry "bear right", "turn left" and take in British idioms such as "at the next roundabout, do a left". Plus, instead of merely telling you which road you're travelling on and which to take next, a label that pops up in the bottom right actually tells where you are.

Drive north up the M1 then the M6, and as you pass Milton Keynes and Birmingham, a popup appears informing you of this fact; it's more useful than you might think, and something no other Satnav we've ever seen does.