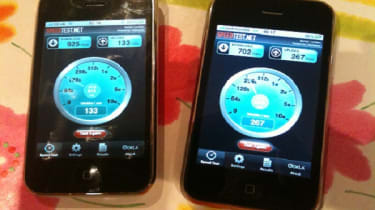 We also made a call at each location and all was successful, with no discernable difference in call quality. However, we can say with certainty that we have experienced many failed calls at various times over the last six months on our own O2 iPhone, and indeed we had one dropped call while travelling back from the tests.

Overall though, in our tests Vodafone proved to be the best in town when out and about. It also achieved the highest single download score, hitting 3,067Kbps in Westminster.

With nothing to speak of between O2 and Vodafone for the deal it's really down to network performance. In our tests, it was Vodafone that delivered the better results in London, delivering on its claims of having the better network. In our opinion it also offers a slightly better tethering charging options and more useful apps.

Based on this if you're going for a new contract, it's Vodafone we'd choose as the most consistently speedy.

With so many variables in play, getting a true picture of network performance is a tricky bet for us, but Vodafone delivered the best results in the more demanding environments. It charges more for tethering if you need 3GB, but otherwise it charges the same or less than O2. It also has more apps than O2. Ultimately though, it’s network performance that counts, and on that basis, Vodafone would be our recommended network for new iPhone customers.