Mobile operator Vodafone has brought its Access Gateway 3G-boosting device out of the shadows as it looks to add unique appeal to its iPhone offerings. 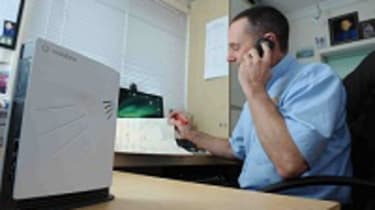 Vodafone UK has rebranded its femtocell service and cut its price to boost the appeal of its iPhone package.

The existing Vodafone Access Gateway has been given the far softer title Sure Signal, benefiting from a marketing push into the bargain as Vodafone tries to raise its profile.

A femtocell is in effect a small cellular base station linked up to a home or office broadband connection to guarantee signal. It then creates a limited network of 3G coverage effectively taking the mobile phone mast out of the picture. Up to four devices at a time can tap into it, with its proximity implying faster speeds and better, more consistent signal.

Telecoms regulator Ofcom published a map of so-called 3G "notspots" in July, showing large tracts of the country unable to access fast mobile internet connectivity. And while the situation has undoubtedly improved, it remains a frustration for many whether at work or at home.

The Sagem-made device was initially priced from 160 for home users, and Vodafone made little of its presence in its product line. However, that price has now been slashed to as little as 50 or 5 a month for a year to contract holders already paying 25 or more per month, or 120 in total - 5 per month for two years - for those paying less than that.

Vodafone is the latest UK operator to offer the data-hungry iPhone on its network. And with a large part of the iPhone's appeal lying in the myriad of web-enabled apps available through the App Store, Vodafone is perhaps banking on the fact that any system that can improve 3G coverage is bound to add to its allure as an iPhone carrier especially one that none of its rivals can match.

"No other network in the UK can ensure a great mobile phone signal in the home, because the Sure Signal is unique to Vodafone," said Vodafone UK chief executive Guy Laurence in a statement.

"Customers tell us it is life-changing. If they live or work in a basement for example, the only way they may be able to get consistent mobile coverage could be with a Vodafone Sure Signal."

Vodafone says that although only four handsets can be used on Sure Signal at any one time, up to 32 different numbers can be registered as eligible for access, and these can be updated at any time via the Sure Signal portal on Vodafone's website.

The system supports only Vodafone handsets, and you'll need broadband speeds of at least 1Mbps for it to work.