The Acer Liquid A1 is Acer’s first foray into the Android arena, but does it fare better than the manufacturer’s Windows-based devices? We review it to find out. 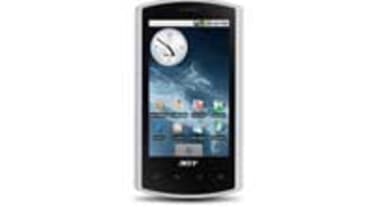 Android's 1.6 OS is well hidden by the Acer 3.0 UI. But this isn't necessarily a good thing. The Vanilla version of Android 1.6 may be a little lagging behind that of the Google Nexus One with its 2.1 firmware, but Acer has managed to hide all the good parts and leave holes where Android draws blanks.

The Acer-specific widgets are nothing special. A media carousel is useful if you're a multimedia junkie, but if you want hard-hitting business features, you'll be a little lost here.

There's a social networking app that pulls in Facebook contacts to your own phonebook, but it's nowhere near as impressive as others such as the Motorola DEXT's. Although the latter's system was a little more fun to use, it did the job well.

Although Acer has traditionally been a business manufacturer, we can't help but feel the company's first foray into the Android space is a tad gimmicky. One such example would be the status indicator. It's built into the black casing and different colours mean different things. The battery indicator lights up to provide reassurance that the device is charging. A flashing white light signifies an incoming call, while another shows that you've just received a text.

If you're taken by flashing lights, you may find this a clever feature. If you're not, it's damn annoying, particularly if you tend to leave your phone to charge by your bed overnight.

In terms of pre-installed software, the Acer Liquid A1 isn't a bad option, especially when you consider there's a shortcut to the Android Market for more variety in the apps department.