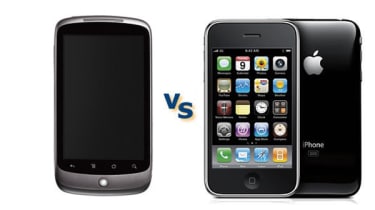 Don't get us wrong though; it's not as if we hate the Nexus One's keyboard after all, it's AMOLED and we like AMOLED screens but it doesn't have the same level of wow factor as the iPhone.

As we observed in our Google Nexus One review, "the Nexus One's Snapdragon processor is 66 per cent faster than the processor in the iPhone 3GS (1GHz vs. 600MHz)".

Qualcomm's Snapdragon processor has always been the cream of the crop, and it certainly doesn't fail in its Nexus One implementation. This bad boy is fast.

Although the iPhone 3GS is noticeably faster than earlier versions of Apple's super phone, playing games still isn't as smooth as it could be.

Even without multitasking, you will notice stutters in the iPhone's performance when loading apps, made even worse when you're playing music at the same time.

The Nexus One steams along, whether you have one, two, three or four apps open simultaneously.

Why doesn't every smartphone ramp their processors up to 1GHz? It even worked on the Toshia TG01, which would be, quite frankly, a hideous phone if it weren't for the processor.

The most contentious feature of the iPhone 3GS is that the camera is not even close to the standard of other smartphones. It's just three megapixels, there's no flash, and photos come out slightly grainy even in bright conditions.

The Google Nexus One's snapper however, is a little more in line with what you'd expect on a flagship device. Resolution is better at five megapixels and it has a much better go at metering light, so photos are less grainy and much easier on the eye.