We review the Draytek VigorIPPBX 2820 to see if its combined router and IP PBX capabilities make life easier than buying two separate products. 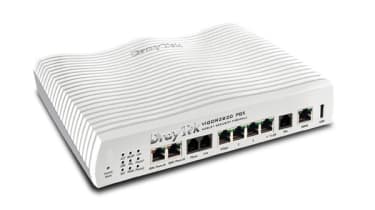 VoIP telephony is a convenient and inexpensive way to provide your business with multiple phone lines, but rolling services of this sort out to an entire office typically requires IP PBX call routing hardware and software that is often expensive to buy, complex to configure, or both.

Draytek's VigorIPPBX 2820 is a combined router and IP PBX, which means that a single piece of equipment can handle your telephony system as well as your computer network and WAN connection.

The device has a USB port, Ethernet WAN, ADSL, four Ethernet LAN ports (three 10/100 and one 10/100/1000), two ISDN ports and analogue phone in and out ports. The current firmware allows you to make and receive called using the analogue line, and use it as a failover if power is cut, but the analogue line can't be configured for used as an IP extension - Draytek promises an update to correct this in the near future. The single Gigabit LAN port means that you'll need to invest in a Gigabit switch if you wish to connect multiple machines to a high-speed local network.

Configuration is remarkably simple, thanks to a clean, easy-to-use web interface with a handy quick setup wizard. The wizard prompts you to first set your router's password before selecting your WAN interface. You can choose between WAN1, associated with the router's ADSL port, or WAN2, which can be configured to use either an Ethernet connection or a mobile broadband link via the USB port. If you're using multiple connections, it's a good idea to give them a display name at this point to make it easier to distinguish between them during later configuration.

After saving your settings, any additional configuration is done via the VigorIPPBX 's comprehensive settings screens. These are arranged clearly, although notes on the features and their usage aren't included in the interface itself. You can have two simultaneous WAN connections, which can be configured as either one active connection with a failover to take over if it goes down or as a pair of simultaneous connections for improved throughput. Unfortunately, WAN1 is permanently associated with the ADSL port, so you can't use an Ethernet connection with a 3G failover, as both can only be set up on WAN2.