HP is the first of the blue-chips to move into the multi-node server market and in this exclusive review we see whether it sets the standard for the rest to follow. 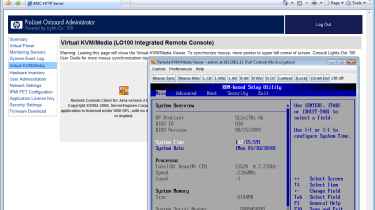 General node design and layout look good as the processors are staggered down the boards to avoid interfering with each other's air flow and all major chips have small finned heat sinks. The single expansion slot is the PCI-e 2.0 16X variety and accepts a half-height card.

The power cabling at the rear of the tray looks a bit messy but it's held firmly in place with cable ties and doesn't get in the way of upgrade manoeuvres. The space in front of the power board is used as a storage bay and has room for two 3.5in. hard disks.

This is the one area where the SL6000 products come up short as storage is very limited. At present, there are no plans afoot to offer support for 2.5in. SFF hard disks so you're currently limited to one drive per node. This makes the embedded RAID controller on each node completely pointless and without the ability to create drive mirrors you have no storage redundancy.

Initial noise levels on power-up were so loud we involuntary stepped back in case the server took off. Fortunately, the system settled down to a gentle hum after a few minutes but the fans will briefly go into turbo mode wherever a node is powered up or rebooted.

Each node has an embedded Lights Out 100i controller for remote management which shares one of the Gigabit ports. Compared with HPO's iLO2 controller, features are fairly basic as from its web interface you can reset the node, power it off and on and do a hard reset.