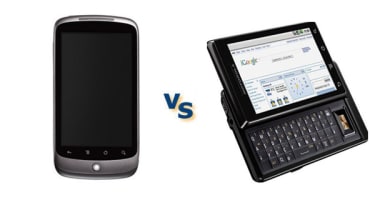 Google'e AMOLED screen may be exactly the same physical size as the Milestone's but the quality provided by the HTC-manufactured Google Nexus One just slips by in terms of crispness and brightness.

If only all touch screens were AMOLED.

So size may not always matter, but when it comes to a phone, it's always better to have a phone in your pocket that doesn't raise suspicion or result in awkward questions.

This extra bulk may be down to the added QWERTY keyboard hiding under the Milestone's fascia, but it's way heavier too at 165g, compared to the Nexus One's featherweight 130g.

If that doesn't have your pockets groaning, we don't know what will.

The Milestone's QWERTY keyboard may not be the best on the market the keys are spongy and constructed from a single piece of plastic with only grooves to separate each key.

Another foible with the keyboard is that as is the norm with sliding QWERTY keyboards, the top panel obscures the top row of keys when it's out.

The Nexus One on the other hand, only features a range of onscreen keyboards. Although they're a doddle to use, sometimes it can be a little fiddly to type fast, especially when in portrait mode.

It's always easier when you have a hardware keyboard beneath your fingertips, so although Moto's keyboard may not take the biscuit when compared to the likes of the Nokia N900, it's still better than virtual.

Both the Motorola Milestone and Google Nexus One pack a five megapixel camera.

Motorola is more accustomed to multimedia though, including a dual LED flash in comparison to the Nexus One's single flash.

This isn't always an advantage though the Milestone's flash often bleaches out light areas, whereas the Nexus One's can't quite reach to the darkest corners.