Smartphones vs netbooks vs tablets - which is best for you?

How do tablets compare to netbook and smartphones? 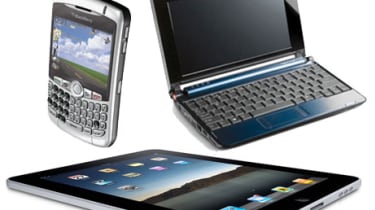 Five years ago, there was little technology around to aid you working outside the office. Smartphones were in their first stages, but mobile internet speeds weren't fast enough to give broadband on the move.

A couple of years later and smartphones began to be described as mobile computers. This was quickly followed by netbooks and booklets, such as Nokia's Booklet 3G with an integrated data card for full web browsing on the move.

Tablet PCs have been around since 2001, when the first was announced by Microsoft, but they've always been hanging around in the background, behind notebooks and netbooks.

Since CES, and the iPad's launch, the world has gone tablet mad, with Dell, HP, Lenovo, Asus and Archos all signaling a new trend in tablets.

So which of these devices is better for working away from the office?

The obvious advantage of a phone is that it's small and although smartphones are generally larger than regular phones, they will simply slip into your pocket.

Tablets can take a range of different guises. The iPad doesn't feature a keyboard at all, unless you opt to purchase the dock with integrated keyboard. On the other hand, Acer's Eee PC T-91M does include a keyboard, but it also features a touch screen and operates on Windows 7, swivelling to expose its hardware keys.

There are a whole host of devices that attempt to bridge the smartphone/tablet gap, such as the Nokia N900 that operates on the Linux-based Maemo OS and its predecessor, the N900 Tablet. Both of these include a full QWERTY keyboard, although tote a much smaller screen, and until the Maemo OS is more developed, such a device will struggle to compete against the more advanced tablet PCs.

With the dawn of the applications boom, it's also simple - and normally cheap - to download applications for almost everything onto your phone, whether you have a BlackBerry, Windows, iPhone or Symbian device. Even WebOS' app store is growing for Palm users.

However, smartphone screens are small and many popular applications such as Pocket Excel only allow you to read documents rather than create them on the move.

Tablets rarely integrate the sort of OS you'd expect on a netbook. Although some, like the bulky Lenovo ThinkPad X200 Tablet, utilise the touch screen features of Windows 7, others use a slimmed-down version of the most popular operating systems.

Samsung's NP-Q1U runs on Windows XP tablet edition, the Archos 9 PCTablet on Windows 7 Starter Edition, and some more recent introductions to the tablet game have been built around Android, such as Dell's Concept tablet, which was revealed at CES 2010.

Battery life is another issue when using a smartphone. More often than not, manufacturers implement batteries designed for making and taking calls, receiving emails and powering an always-on data connection.

They are not particularly designed for running multiple applications, while swapping between Wi-Fi and a data network for long periods of time.

The battery lives of netbooks and tablets are comparable often providing up to 10 hours battery life. Of course, with a tablet, there's a touch screen to power, but this doesn't have to affect battery life as the HP TouchSmart tm2t series shows.

Multitasking is another issue. Although many smartphones are excellent at multitasking - including BlackBerrys, Android devices and any handset running Windows Mobile - they still don't have the processing power of netbooks.

Tablet PCs and netbooks are designed to run like notebook computers, so are much more adept at running more than one program or app at any one time.

Processor speed is the main gripe in this game though. You can expect much higher speeds with both tablets and netbooks, plus a full processor whether you opt for Intel, ARM or any other processor, it's sure to be faster than a smartphone, offering speeds up to 1.4GHz.

Capacity is another issue. Sure, Nokia has always been excellent at bolstering memory so you can store every document you've ever written, in addition to music and video, but other smartphones have a long way to go until they will pack the same storage as netbooks. They may have the bonus of microSD card slots for extra hot-swappable memory, but even this will only boost storage by up to 32GB.

Tablets and netbooks are much better suited to those who need storage. Not only is the built-in storage much larger - up to 320GB as standard - you also have the choice between solid state or ATA. SSD may be more robust, but also 10 times as expensive and generally smaller in capacity.

As a general rule of thumb, tablets are more expensive than netbooks, although you won't always have to empty your piggy bank to get in on the action.

There are options to suit all budgets whether you opt for the more sober with a tablet like the consumer-friendly Eee PC T-91M at around 350, or you go all out and opt for a more fully featured device such as the Fujitsu Stylistic ST6012 which is almost 1,400 without any upgrades - is up to what you require from working on the move.

What you pay for where Fujitsu is concerned is the 12.1-in touch screen display with integrated e-ink technology to make handwriting recognition a breeze. Asus' cheaper option is less powerful and uses a conventional resistive touch panel, including a full hardware QWERTY keyboard for speedy text entry.

However, the tablets that have been on the market have not reached their full potential thus far. Thankfully, the dawn of the tablet has now arrived, thanks to compact devices such as the iPad.

With technology evolving so quickly, there's no stopping the portable technology sector. Netbooks are the best featured at the moment, and provide an excellent choice for those who need access to full laptop features in a small form factor.

Tablets however, are catching up. Soon, there won't be the day where these three devices co-exist so happily. Instead, they will merge to make a fully featured, fully functional hybrid device where connectivity is key.

Windows 7 has brought a whole load of extra features to the table, taking advantage of its multitouch support, but these notebook-like devices are generally more expensive, with super-powered processors needed to run them.

Maybe the answer lies in operating systems such as the Linux-based Maemo or Google Android, although these platforms need a boost before they have the same capabilities as a netbook.

Until that day, the choice is yours. Do you want a compact device to slip in your pocket, an always-on device that uses downloaded apps to do everything you want it to do at the expense of little power and a small screen? If so, choose the smartphone option.

Do you opt for the mid-point? A device with the optional keyboard, larger touch screen and fuller OS. If you do, a tablet may be more your thing. But if you'd rather have a compact, fully functioning netbook and could never imagine using a touch screen for virtual text entry whether using your handwriting or otherwise - a netbook is better suited to your needs.