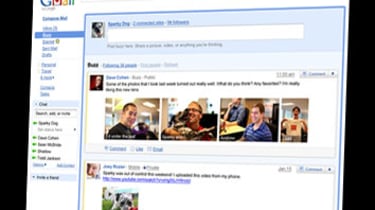 Google has fired a salvo at Twitter and Facebook by unveiling Google Buzz, a social networking tool that sits within Gmail.

This new communications tool goes "beyond status updates" and automatically sees you following the people you already email, according to the web giant. It will start appearing in existing Gmail users' accounts over the next few days.

"Buzz is like an entirely new world inside of Gmail," said Todd Jackson, Google Buzz product manager, during a webcast this evening.

The new tool, which sits within a dedicated tab in Gmail, will help users filter through the noise on the web, according to Google. Images, for example, will be displayed "big and fast" claimed Jackson.

"If I want to post [images] publicly I can share them to the world. Anything I post publicly will go to my followers and my Google profile," he said.

"...Instantly indexed by Google's real time search. But I can also share privately. It's easy to post to groups and also easy to create custom groups.... We paid attention to these little details as we heard from users this was too hard to do on other websites."

Indeed, many users resort to using one website for private activity and another for public sharing, according to Jackson.

"We wanted you to be able to do both in Buzz really easily," he added.

In a way akin to the likes of Twitter, users will also be able to interact directly from their inbox with their colleagues, friends or family.

"We want to send the best Buzz to Gmail not all Buzz," Jackson said, before explaining that status updates people like or have replied to will be headed for your inbox.

"The @reply is a feature becoming popular on the internet and we wanted it to work really well on Buzz," he added.

A feed-based API will also enable developers to easily integrate Buzz with their own products. Google has said this will evolve into a full read/write API in the future.

The good news for business users is this isn't just a new toy for the share-happy consumer. Google is eyeing the corporate space too.

"We also plan to make Google Buzz available to businesses and schools using Google Apps, with added features for sharing within organisations," it said in a blog post.