Google has unveiled its take on social networking, but what does it mean for users and is there anything in it for businesses? 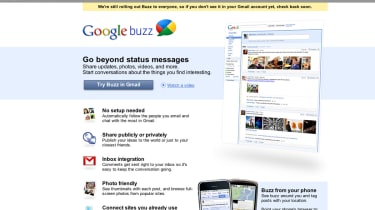 What is Google Buzz?

It's a "new way to start conversations about the things you find interesting and share updates, photos, videos and more," according to the official Google blurb.

As to what that actually means, think social networking. Rather than having to use multiple platforms or tools to connect with the people you want to talk to, or share the information you want to share, you can do it all in one place.

So how does it all work?

If it sounds familiar, it's probably because it is. Many people are suggesting that Buzz builds on some of the ideas and concepts created in Google Wave. But it then takes that foundation and builds a more solid solution on it.

It's all about sharing. Photos appear "big and fast" according to Google and videos play inline so the user experience is a much slicker.

You can automatically get buzzing with the contacts you've already got stored in your Gmail index. You can also follow people you think are interesting too.

The system will also recommend posts of interest that may come from people you aren't following. Popular buzzes and ones people have replied to will also head straight to your email inbox.

But my Gmail inbox is already overcrowded...

In a way akin to the likes of Twitter, users will also be able to interact directly from their inbox with their colleagues, friends or family.

"We want to send the best Buzz to Gmail not all Buzz," Google Buzz product manager Todd Jackson said, before explaining that status updates people like or have replied to will be headed for your inbox.

"The @reply is a feature becoming popular on the internet and we wanted it to work really well on Buzz," he added.

The Buzz tab will automatically appear as a new tab in your Gmail account. But if you can't wait until then and want to know more, click here for our news story covering the launch and a demo video to satisfy your craving in the short term.

Nope, according to Google. This new tool goes "beyond status updates," according to the company. While Buzz can pull in updates from Twitter, users can't actually post once in Buzz and have that appear on Twitter.

What about mobile support?

Since releasing Android and the Nexus One, you can be sure that mobile considerations will feature on the agenda with new product releases. And that's the case for Buzz, with iPhone and Android users being able to Buzz while they're on the move as well as using geotagging tech so your contacts know where you are while you're buzzing. In the same way, you can also find out who's buzzing in your vicinity.

Any other features of note?

All in all, Google reckons that Buzz helps users filter through the noise on the web. We'll bring you a first look review as soon as we can to give our take on whether that holds true or not.

The main tenets of Buzz, according to Google are:

Integration with your Gmail inbox

Perhaps in a sly dig at some of the troubles Facebook has been having of late when it comes to privacy, Google assures us this is at the forefront of Buzz's design.

"If I want to post [images] publicly I can share them to the world. Anything I post publicly will go to my followers and my Google profile," Jackson said at the launch.

"...Instantly indexed by Google's real time search. But I can also share privately. It's easy to post to groups and also easy to create custom groups.... We paid attention to these little details as we heard from users this was too hard to do on other websites."

All sounds good, but do any businesses really make use of Gmail? Why should they care?

We'll let Google answer that one. "We also plan to make Google Buzz available to businesses and schools using Google Apps, with added features for sharing within organisations," it claims on its official blog.

Anything else in it for the business world?

Apart from providing another tool to aid collaboration, Buzz's openness means it is also somewhat reliant on developers as to how it evolves.

There will be a feed-based API made available to the dev community so that creative brains can merge Buzz with their own products. This API will have read/write functionality in the future.

When can I get it?

Google has said that it will be rolling out Buzz to existing Gmail users over the next few days, so keep checking back in your account to see if it's appeared. iPhone users can start buzzing straight away by visiting buzz.google.com and moving the associated icon onto their home screen.