We take a quick look at what Google's new social networking tool has to offer. 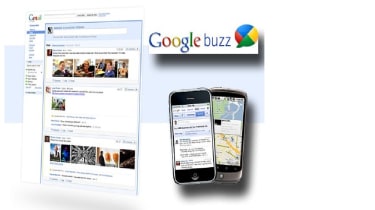 Fed up with Facebook? Tired of Twitter? Well, theres a new social networking and messaging kid on the block; Google Buzz. The service that made its debut just yesterday aims to offer users the opportunity to share status updates, videos, photos links and so on with their contacts from within their Gmail inbox or from their mobile device. 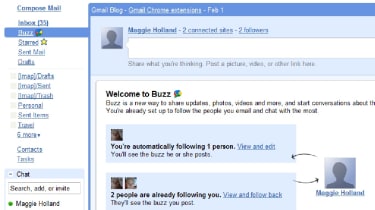 At first glance the service looks and feels good, offering users a simple status update interface which will be familiar to Google users. It also offers the option to integrate Twitter, YouTube, Picasa and Flickr accounts allowing users to share photos and video simply and efficiently (although the Twitter integration wasn't yet working in our version at the time of publication). There's also the option to upload photos from your desktop if you're one of the few people who hasn't yet signed up for one of the online services.

You could be forgiven for wondering why Google has chosen now to launch Buzz, when its competitors have been on the bandwagon for a while - as they've also been quick to mention - but the recent arrival of Google's super smartphone the Nexus One might have something to do with the timing.

What isn't as clear to us is why the company has chosen to debut a new service rather than expanding the functionality of its previous release, Google Wave, which is missing a few simple but important features (contact importing and integration into Gmail being the most notable examples). Also, the question of whether consumers really need another social networking tool is one that merits debate. Some people already lead as hectic a life online as they do offline, so this will surely just be another site to check throughout the day.

A feature worth mentioning is that users' comments or updates come through to your Gmail inbox, which may be a boon for the social networking junkies among you but for us it was a pain. When Google goes to great lengths to keep our inboxes clear of junk we were left wondering why this was any exception. There are ways around it, naturally, but we believe that the function should be opt in, not opt out. 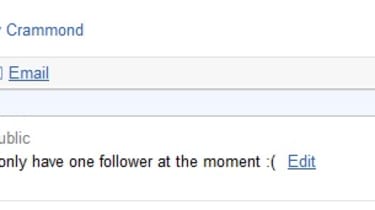 On the whole our experience with the desktop incarnation of Buzz was positive. The Google touch on social networking is interesting and users may appreciate the more tangible front, with people being able to see your name, face and location with every update you make, though we're sure some users appreciate the buffer their networking site offers between them and their acquaintances.

Although direct marketing isn't seen as a positive in the information age there will be some services that users choose to interact with and the marketing potential for Buzz also seems bright with restaurants and other venues being able to update customers with real-time information on availability, prices and location.

The mobile version of Buzz has also been well realised, offering a slightly more revved up experience for users, who are able to see updates from their followers and from Buzzers that are in their immediate vicinity via the GPS function on their mobile devices.

Photo and video integration from the mobile platform wasnt available to us during the review period, so we cant comment on what the future holds in that department as yet. We contacted Google but it hadn't responded to our request for comment at the time of publication.

It's also worth noting that the mobile version is currently only available to iPhone and Android (2.0+) users.

It may not be ground-breaking but Google Buzz certainly opens the social networking market up to users who might not have previously shown an interest. Users that historically perhaps only used the email service from Google will almost certainly find themselves communicating with their friends via Buzz and mobile users may well turn to Buzz in light of poor handset support for Facebook by mobile developers, notably those developing for Android.

Overall we'd recommend you give it a look when it hits your Google account over the next few weeks. It has loads of potential and anything that allows us to stay in touch with our friends or colleagues without being asked to take quizzes or play Farmville definitely gets a thumbs up.

And, with its photo and video hosting capabilities it may even turn the head of the hard-core Twitter user. But only time will tell.