Does the Sony Ericsson Xperia X10 Mini Pro live up to the precedent set by its older and bigger brother? 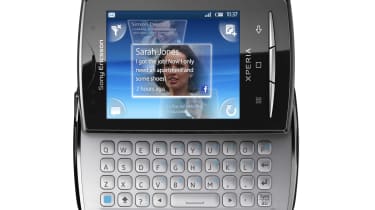 It's no secret that modern business users are no longer happy putting up with carrying around the phone equivalent of a boulder just so they get all the functionality they crave.

But, historically, they've still had to compromise to some extent. Some are happy to go for slightly bigger (Yes, the TG01 we're talking about you) handsets to get the kind of display lavishness they crave, while others have gone for looks first and worried about business-level support later (First generation iPhone we're looking in your direction now).

So can Sony Ericsson give business users what they want with its slimmed down Xperia X10 in the form of the X10 Mini Pro?

When you first pick this handset up, you can't help but think you're missing something. At 120g, with vital statistics of just 52mmx17mmx90mm (WDH) it feels like someone's forgotten to put the battery in.

But that's purposeful design rather than user forgetfulness at work.

On paper and in reality the X10 Mini Pro ticks all the boxes. A slide-out QWERTY keyboard is on offer to help give it that all-important business edge and it runs the 1.6 version of the Android operating system. We were a bit miffed at this decision, but we can only cross our fingers that it will be deemed as suitable for an upgrade to 2.1 sometime soon.

There's also a five megapixel camera, 3.5mm headphone jack, shortcuts powered by the four corners of the touch screen and social networking tools a plenty in the form of Sony Ericsson's TimeScape.

In reality, the keys are as nicely spaced as they can be in such a small form factor and the screen does the job well enough. Just don't expect to ramp up a speed if you have average to large digits or expect to have colleagues crowding around you ready for a presentation or watch a film comfortably on a long plane journey or commute.

Android's big draw lies in customisation. You're meant to be able to add and remove widgets til your heart's content and make your home screen(s) your own, whether at work or play. But at little over two-and-a-half inches in size we're not sure just how far you'd be able to do this on the X10 Mini Pro's screen without things feeling a little too crowded.

No, we're not doing the handset down for the sake of it. We're just being realistic. While the design is slick credit to Sony Ericsson where credit's due and the functionality there, some things just won't be practical in reality. Yes, you can use the device for emailing, texting and keeping up with office live on the move. And yes, you clearly can watch video and look at pictures on the device, but we fail to see at this stage why you'd opt for doing so for prolonged periods of time on the X10 Mini.

We only got to play with the handset for a brief period at Mobile World Congress (MWC) so we're keen to spend a bit longer testing out what it has to offer, including putting battery life through its paces. When we do, we can only hope our initial thoughts prove to be unfounded and that the X10 Mini Pro turns out to be a surefire business communications companion rather than a secondary device you make use of every now and again