We take a look back at the top 10 technologies, products and services announced, demoed and launched at this week's Mobile World Congress (MWC) event in Barcelona. 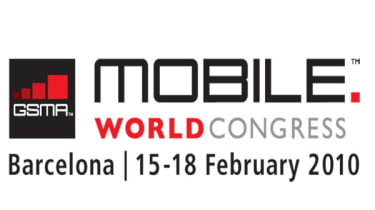 The four-day event was a whirlwind of announcements, keynote speeches, demonstrations and launches, as well as a great networking opportunity for vendors and decision makers alike.

To separate the really interesting technologies from all the noise, we run down our top 10 technologies, products and services from the main event.

This innovation even had Stephen Fry excited. And that's no mean feat. Hidden away on the DoCoMo stand, the headphones sound a bit like something you'd find in a science fiction film. But they're actually here now and wowed the crowds at MWC.

This innovation makes use of your eyes, rather than your digits or speech, to control media player functionality. Looking left or right, for example, will instruct the player to fast forward or rewind the track you're listening to. We like the idea but think the reality will take a bit of getting used to. And it could prove problematic if you get something in your eye while listening

2)Phones for all budgets

Vodafone announced plans to launch two cheap handsets to boost mobile access in developing countries. The company's 150 and 250 low-cost devices will be made available for just $15 and $20 respectively in eight countries in Africa, in addition to India and Turkey.

While users in the developed world may sniff at what the no-frills handsets offer voice and texts, with the 250 also boasting a colour screen and FM radio in developing countries mobile phones are key to everyday life, especially as the related infrastructure in some countries is more advanced that the fixed line infrastructure.

It was highly unlikely that MWC would come and go for another year without anyone mentioning Android. Google's chief executive Eric Schmidt took to the stage for his keynote to talk about how the mobile OS is still very popular, with 60,000 handsets running the platform being shipped each day.

HTC also showed it still loves Android by showcasing the Desire, which is widely being touted as the next Nexus One. It'll be hitting the UK in just a few months.

Steve Ballmer even flew to Barcelona to deliver the good news himself. As we all suspected, Windows Mobile has been given a big makeover and will now return -reinvented and much improved later this year on a range of handsets and networks.

Dubbed Windows Phone 7 Series, the new launch will no doubt be backed by a big-money marketing and advertising campaign to spread the message to business users and consumers alike. If you've used Windows Mobile before and had a bad experience, it's likely this may just be enough to change your mind. Of course, only time will tell whether the tweaks will be enough to have the rest of the mobile world shaking in their boots or not.

While we all love our phones, most of us have a love/hate relationship with them, throwing them when we're angry, putting them in the same pocket/bag as our keys and just generally not treating them as well as we should and could.

And, while it's highly unlikely that the average business user will find

themselves running over their handset with a car on a regular basis, it's good to know some phones are up to the challenge nonetheless.

Sonim's XP2 Spirit is made out of tough stuff, with Gortex, hardened rubber, nylon and fibreglass and a magnesium core ensuring it is both waterproof and able to shrug off the harshest of treatment without issue. Gorilla glass also means the Spirit and your keys can remain friends rather than foes.

But it's not all just meaty packaging. The handset also boasts a three megapixel camera, suite of Java apps, a multimedia player, support for IMAP4 and POP3 email, web browsing and more.

"We've watched our customers closely and have seen how they struggle when they don't have a Sonim phone in-hand. We strive to deliver the strongest phones that can withstand the noise of a jackhammer, a rocky mountain face, splashing water or intense wind and rain," said Bob Plaschke, Sonim's chief executive, in a statement.

"The Spirit continues Sonim's tradition of marrying technology and toughness and now introduces 3G to deliver the best rugged mobile phone on the market. The Spirit will be available in stores across Europe next month."