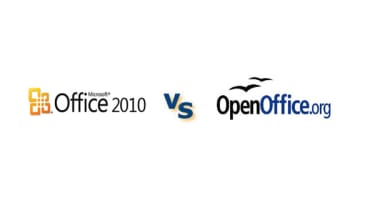 In this head to head we are focussing on the two most popular suites of office software on the market today. While some people consider the comparison a little one sided, we thought it was time to give Open Office a chance to stand up to the heavyweight that is Microsoft's 20-year old Office, in its latest beta incarnation.

Some may suggest this is a David and Goliath-esque battle as Open Office recently celebrated its 100 millionth download since version 3.0 was made available and Microsoft Office is believed to be used by more than 500 million people worldwide. But we have chosen these two big-hitters because of the wealth of support and features available. We'd also like to offer a nod to Google Docs, a suite we see as a potential contender for the future, when it will make up part of the upcoming Chrome OS.

While we recognise that many businesses might not be in a position to rip out and replace their previous Microsoft infrastructure, particularly if they've invested heavily in it over the years, the purpose of this comparison is to outline the key points in Office 2010 and Open Office's favour.

Smaller businesses with fewer tech assets and perhaps less legacy kit, those looking to set up a new department and trial something new before reporting back, for example, may be intrigued by open source alternatives to Office but not quite sure what's in it for them.

This comparison tries to answer those questions.

NB: At the time of review, Microsoft's Office 2010 suite was still in beta, but showcased the majority of the plus points the full version will offer. Following the review period, Open Office 3.2 was released offering a few more features that have not been compared or explored in this comparison due to the fact that the entire review compared version 3.1 and the Office 2010 beta in depth. Our intention is to compare the latest version of Open Office and Office 2010 again when the final Microsoft product is released later this year.

Both offerings have been lauded for their user interface (UI) in the past, albeit for different reasons and these incarnations aim to continue that trend.