Qnap’s new NAS appliance has Intel’s latest dual-core Atom processor at its heart. This eight-bay desktop box is packed with features and in this review we see whether it delivers in the speed stakes as well. 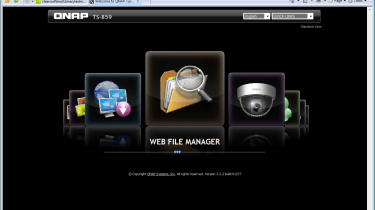 We tested with an Axis 216FD camera and found it worked fine with the appliance. However, if you want more IP cameras then check out Synology's latest business NAS appliances as some of these support 16 cameras out of the box and offer equally good surveillance features.

For general performance testing we called up a Broadberry CyberServe rack server equipped with dual 2.8GHz Xeon X5560 processors, 6GB of DDR3 memory and Windows Server 2008. Qnap's own benchtests claim a top throughput of 570Mb/sec or just over 71MB/sec and for read operations we can confirm these figures.

Using drag and drop copies of a 2.52GB video clip we saw average read and write speeds over Gigabit of 76MB/sec and 60MB/sec. FTP operations were noticeably faster with the FileZilla utility reporting speeds of 105MB/sec and 72MB/sec respectively.

IP SAN performance was also on the money with the Iometer utility reporting a very respectable raw read throughput of 103MB/sec for a 50GB target. The TS-859 is easy on the power supply as well as with four drives installed we saw it pulling no more than 52W. With the drives in sleep mode this dropped to around 32W.

We initially thought the Atom processor would have a negative impact on performance but our tests show this is far from the case. The TS-850 Pro also offers plenty of valuable storage features including good IP SAN support. If you want an eight-bay business-class desktop NAS appliance you need look no further.

Qnap is unique as it’s the only vendor that currently offers desktop NAS appliances that support eight 3.5in. or 2.5in. drives. This gives the TS-859 Pro a price advantage over eight-bay rack mount appliances that cost around 25 per cent more. Performance is very good, it’s quiet, has plenty of business-focused features and support for IP SANs is better than most.