After our first look at the Tecra A11 at Toshiba’s 2010 press day, in this review we take an in-depth look at this new business notebook. 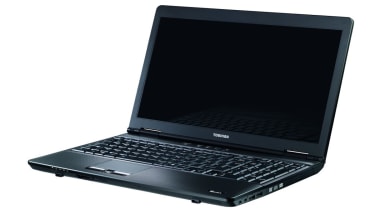 A key feature of this machine is its large 15.6in screen and Toshiba has quite deliberately given it a non-reflective display that doesn't distract with glare after prolonged use. While the screen is natively 16:9 widescreen the 1,366 x 768 resolution is as low as it could be, and this will hamper the laptops use for more creative tasks, unless you output to an external display. At least the screen is bright and the lighting even.

The keyboard itself is good in terms of feel and while there's a perceptible movement of the keys underneath the fingers, the action is solid and we were quickly typing at speed. Toshiba has made good use of space with the Page up and Down keys down the side but the Enter key is slightly smaller than we would have liked. When you press the Function key, an overlay of each icon appears at the top of the screen and icons with labels appear as you select the option, which does make it easy to see what you're doing.

In addition to the regular track pad, Toshiba has provided a TrackPoint controller - Lenovo ThinkPad style - along with mini mouse buttons beneath the space bar. While some may not care for this, having both this and a track pad as an option is a definite boon. However, the TrackPoint cover felt rough and it also lacked the central Thinkpad scroll button. This means you have to take your fingers off the keyboard and move down to the track pad to scroll, which negates much of the advantage of the TrackPoint.

The track pad does its job at least and though it's not indicated it supports horizontal and vertical scrolling. The mouse buttons are silver, which adds some contrast to the all black look and feel.

Nestling between them is a finger print reader, which is part of Toshiba's Easyguard' platform. This provides a choice between fingerprint registration, facial recognition via the webcam in the display bezel, or your regular text password. We set all of these up and all worked well. While the facial recognition tool is not really a timesaver, there's something satisfyingly futuristic about logging in without having to touch the keyboard. Additionally on the right there's a smartcard slot, enabling this to fit into corporate environments. That said the lack of vPro for remote management is a disappointment.

A pleasing touch is that of the four USB ports (two on either side) one doubles up as an eSATA port. Also on the left is an ExpressCard/54 slot and a mini Displayport connector, but this means you'll need an adaptor to connect to any screen in DisplayPort, DVI or HDMI. However, analogue VGA is provided at the rear, along with a not quite extinct serial connection.

On the right, along with headphone and microphone ports you'll find an integrated DVD Re-Writer. Moving to the front you'll find an SD/Memory Stick reader and an on/off switch for wireless connectivity. You'll also find five lights for disk activity and power.

It's all pretty comprehensive, giving an overall impression of a solid, effective notebook. It won't turn heads, it's not the thinnest or lightest, the resolution is limited and the battery life is decent if unspectacular, but with plenty of raw horsepower it will let you get your job done with the minimum of fuss.

Its size, weight and average battery life mean the Tecra A11 is not ideal for frequent use on the move and the absence of vPro for remote management may limit its interest to larger enterprises. Its low resolution screen is also a potentially limiting factor. Those caveats aside, however, the A11 is a speedy and very useable machine that offers good value – though there are rivals from HP and Sony that will do similar with more panache.