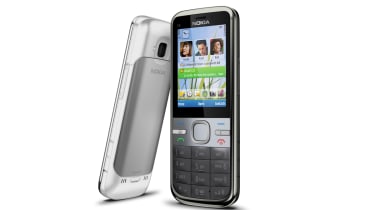 Nokia has officially launched the C5, the first handset in its new C-Series range of entry level smartphones.

While the existence of a new Nokia product line has been rumoured for some time, the C5 first came to light in a series of leaked spy shots last month. It's since become clear that the C-Series is all about value for money, and the C5 kicks things off with an honest feature set and a price tag of just 135 (120) before local taxes and subsidies.

For that you get a traditional candybar device running the Symbian S60 3rd Edition operating system and featuring a 2.2in non-touch TFT screen and 3.2 megapixel camera.

Ovi Mail, Windows Live Hotmail, Gmail and Yahoo! Mail via Nokia Messaging are all built in, while not only do you get direct Facebook and MySpace access, but the C5's phone book integrates with Facebook so you can see your contacts' latest status updates alongside their contact details.

Thanks to its on-board GPS and the recent update to Nokia's Ovi Maps suite, the C5 offers free turn-by-turn navigation out of the box, while on the audio front its features include a stereo FM radio, 3.5mm audio jack and a stereo speaker. A 2GB microSD card is included in the box, with support for cards of up to 16GB.

Like many of Nokia's lower-end devices battery life features high among its plus points, with up to 12 hours of talk time and 26 days on standby possible between charges.

The Nokia C5 will be available in two colours white and what Nokia calls "warm grey" and will go on sale worldwide in the second quarter of 2010.

Italian mobile phone site Cellular Mania, meanwhile, has published what it claims is a leaked Nokia document detailing plans for its in-house Series 40 operating system. According to the document, Nokia plans to add touchscreen support, an improved web experience and support for full QWERTY keyboards to its entry level OS, though no time frame is mentioned.