IBM says its new eX5 decouples the memory and the processor. 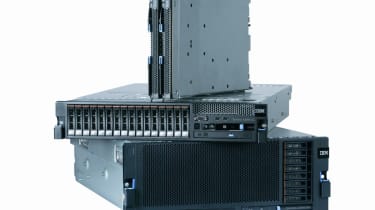 IBM has unveiled its eX5 lineup, a new family of x86 servers that it says will stop organisations from "throwing more servers" in a data centre when they come up against the memory wall.

Available starting later this month, the eX5 was unveiled at CeBIT today in Hannover, with IBM claiming it will slash the number of servers needed in half, reduce storage needs by 97 per cent and licensing fees by 50 per cent.

IBM said its engineers decoupled the memory from the processor, so another server doesn't need to be bought just because the memory isn't holding up to ever-increasing workloads. IBM said this means it offers better scalability and therefore cost savings.

"For example, the amount of data ingested by today's average web-based workload doubles every year, increasing costs and straining resources," IBM said in a statement. "Users have traditionally dealt with the deluge by using the only method available with industry-standard platforms - throwing more servers at the problem, which furthers sprawl and increases power and management costs."

At the moment, the average x86 server uses just 10 per cent of its capacity, IBM claimed.

Throughout 2010, IBM will release an entry-level dual processor system, a four processor edition, and a new blade design.