Chip giant Intel is using the CeBIT trade show in Hanover to show case an experimental piece of tech wizardry. 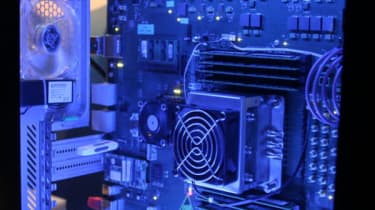 Intel is showing off an experimental 'single-chip cloud computer' boasting a 48-core processor at CeBIT in Hanover this week.

Fitted in a standard PC case with a transparent side and blue lights, the 48-core PC isn't at the stage of running Windows, but Intel did show a live, continually updated demo of each core's load, along with a readout of the power consumption of the chip - which hovered around a mere 75W.

Engineers were tight-lipped about the details, but sister title PC Pro did manage to establish that all 48 cores are IA capable, which should mean they are able to run standard x86 programs. The cores are arranged in an experimental mesh-interconnect scheme, allowing the system to segment resources to run a separate OS on each core, or conversely work together to run a single operating system in the usual way.

It won't be hitting the high street in the near future, though as the 48-core PC isn't quite ready for prime time. No graphics card or any of the standard PC fittings are visible the machine has an entirely custom motherboard purely aimed at research rather than running real applications.

Even so, it's a considerable advance on the 80-core chip Intel showed off only a few years ago, at IDF Beijing 2007. It transpired that each of those cores was little more than a pocket calculator rather than a full x86 processor core.