The Samsung Galaxy Portal could be described as a poor man’s Galaxy, but does its older brother really take the biscuit? 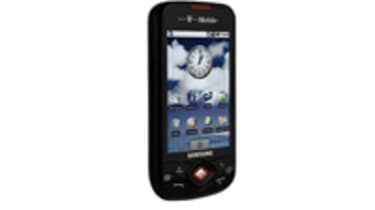 Where the Galaxy Portal excels is under the bonnet. Instead of the Qualcomm MSM7200A 528 MHz processor, Samsung has upped the ante to include an 800MHz number that allows the Portal to steam along - as you'd expect from such a powerhouse.

However, data has been downgraded. While this doesn't make a huge amount of difference when browsing the web, downloads are comparably slower when you think of how slick such activity is on T-Mobile devices that support 7.2Mbps.

In terms of multimedia, the Portal lags behind the Galaxy too. The camera has been knocked down to 3.2 megapixels from five megapixels. Although this won't make a huge difference - unless you want to print out your photos larger than A4 - the quality of the camera is pretty poor. Our first attempt at taking an indoor photo resulted in everything gaining a yellow glow, and our second attempt was grainy. There's no flash to boost the light either, and it's slow to focus.

When you consider that the Samsung Galaxy Portal is a lighter version of the Samsung Galaxy, it's no surprise that the battery life has been much improved. In our tests, the battery of the Galaxy Portal lasted more than 24 hours, using it constantly for push email, calls, texts and listening to music for an hour. You'd struggle to get eight hours out of an iPhone when using so many features.

The Samsung Galaxy Portal is a slight downgrade from the Samsung Galaxy, despite introducing a tweaked design and faster processor, but this doesn't mean it shouldn't be considered when choosing an Android phone.

It's fast while multitasking and, most importantly, the battery will soldier on for longer than most smartphones. It's also a damn sight cheaper than other Android devices, making it a perfect companion.

Considering the Samsung Galaxy Portal is also known as the Galaxy Lite, it goes far to impress. With a processor boost, albeit at the expense of internal memory, an OLED screen and high-resolution camera, it’s really not that much of a disappointment. Especially when you factor in the battery life.