The chief executive of Second Life thinks virtual worlds will be the future of work. 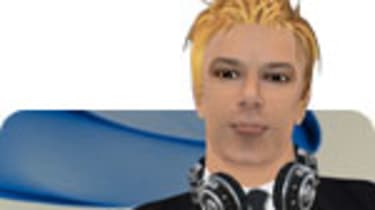 Second Life is often assumed to be a place to go and kill a lot of time, where your alien-looking avatar wanders the landscape looking for virtual sex.

The virtual world is much, much more than that, argues chief executive Mark Kingdon, who believes that people thought the internet was "weird" when it first started, too.

At the CeBIT conference in Hanover this week, Kingdon told IT PRO that more business functions would move to worlds like Second Life, for meetings, simulations and more - especially after the launch of more user-friendly systems, like the beta of its new viewer, which allows document sharing.

You were speaking at CeBIT in Hanover today, as part of their Web 2.0 focused day. What were you there talking about?

Many people have used Second Life to hold meetings BP is apparently holding a graduation ceremony in it. What is it going to take Second Life from where it is now, to where businesses are more regularly using it? Will you need to create a more business-friendly version?

The biggest driver of adoption is going to be familiarity, whether we're talking about the consumer market or the business market. One of things we've just done is launch a beta of our new viewer, which borrows visual metaphors from the web browser, and makes our viewer very much a 3D browser.

For business and consumer users, I think it's going to be much more familiar experience than in the past because of the new viewer. That's one of the things we think will speed adoption for consumers and businesses.

The other thing for business is we do have a behind-the-firewall solution today called Second Life Enterprise, which allows people to create a private instance of Second Life that they can put behind the firewall and connect to their enterprise systems.

So we believe that the new viewer and the behind-the-firewall product will really aid adoption in the business market.

People are using it in businesses for teleconferencing, holding meetings and collaboration, but what other uses are there?

One other very powerful use that we're seeing done extensively in Second Life today is simulations of complex processes or products for virtual training. And there are a lot of companies doing this.

I talked about a case study here at CeBIT, about a German technical services company that has been in Sceond life since 2007.

Since 2007, it has been holding virtual meetings and doing other things, but it is also offering immersive training exercises. One of its products is a radar system that can essentially see underground it's ground penetrating radar.

It has a training exercise in Second Life, I think on its public island, so you can go there and try it yourself. You can learn about the products in Second Life by performing a series of exercises to find objects hidden underneath the ground with this ground penetrating radar. That's one example.

There's another example that I like a lot of how Canadian border guards were taught how to inspect vehicles approaching their border by simulations in Second life. They could create an array of situations they could go through.

We see a lot of simulations being done, on the main grid and then in the behind-the-firewall solution, Second Life Enterprise.

With teleconferencing and meetings, what benefits does Second Life offer that web conferencing or that sort of system doesn't have?

This past this week, when we launched the new viewer in beta, we added a really important and revolutionary new feature, which is called Shared Media, which allows you to go to the web browser and drag any URL to any surface in Second Life and that content or that page will appear.

What's powerful about that is it offers a new level of collaboration around document sharing than we had before. And I think that's what Second Life offers.

The other thing it offers is a persistent space because people can go in virtual offices from any location. It allows people to connect from home or from a caf or anywhere they have decent internet access.

Oftentimes with video conferencing, people need to be in a fixed location so it's not as mobile as it could be.

The other thing that's powerful with our virtual meetings is that with our voice product it's very high quality sound, which is typically better than you get typically with video conferences or speaker phone.

If you put the fact that you can share documents, that you have high fidelity voice product, and you have something that's really really powerful, from a meeting perspective and a collaboration perspective.

A lot of people don't associate Second Life with all of that. When they think of it, they're thinking about the negative ideas that people go there to have sex or have goofy little avatars. What would you say to try to convince a business user otherwise?

I think that all new technologies go through the same adoption cycle. There was a time people thought the internet was weird.

The simple message I have is you have to try it to understand the benefits, but they're incredible and powerful. Some of the largest companies in the world are using Second Life as a routine part of their business.

There are 1,300 organisations and companies worldwide using Second Life as part of their business, for meetings, conferences, complex simulations, distributed learning many, many applications.