Are ebook readers just for consumers or do they have some valid features to offer business users too? We find out in this head to head review as we compare the iRiver Story and iRex DR800S. 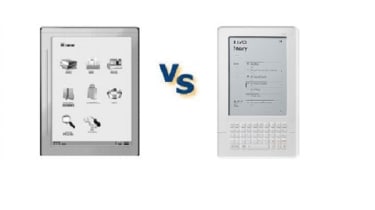 Both the Story and DR800S can be connected to a computer (running Windows, OSX or Linux) via a USB cable, and both can be expanded using SD cards.

Underneath a small cover on the Story's undercarriage you'll find an SD card slot beside the mini USB port. Able to take standard SD cards up to 32GB in size, it's an easily accessible way to bulk-up its built-in 2GB hard drive (1GB equals roughly 1,500 ebooks).

The DR800S, meanwhile, comes with a 2GB micro SD card slot and no internal storage. Unfortunately it's only accessible if you fetch out a screwdriver and remove the back panel; as you're not likely to chop and change it too often, we'd advise buying as big a micro SD card as possible at the outset, though you will have to copy the entire file system to it from the provided 2GB card.

Although the DR800S does come with a stylus, it's not really needed. Yes, it makes things a touch quicker, but for everyday reading and skipping through the menus, the DR800S has a novel (pardon the pun) flip bar.

That flip bar can be set to flip pages from right to left, or vice versa. The former seems more logical, as it imitates how you would normally turn the page of a book, though in practice we found moving the bar in the direction we wanted to go physically forward into the book more natural. As well as page turning, the flip bar is used to select options in the menus, while a button underneath brings up the menus themselves.

Meanwhile, the Story has a lower-profile design that's only partially ruined by its QWERTY keyboard; this is one slim device. Its edges are tapered with subtle page-turning buttons included, which are a cinch to use though don't feel quite as natural as the DR800S.